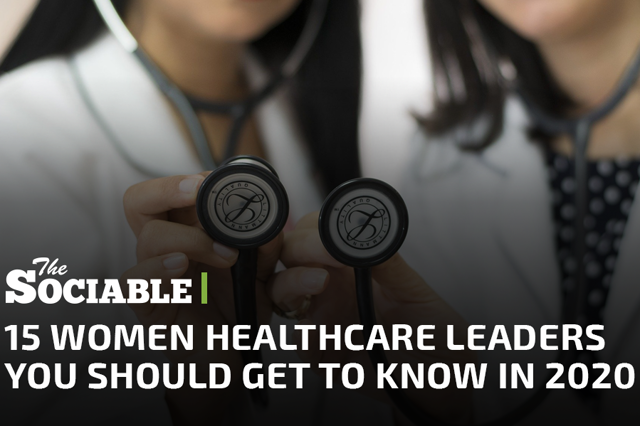 Amid the largest health crisis the world has seen in over a century, many women healthcare leaders and innovators are facing down the most pressing issues related to the COVID-19 pandemic.

From a Brazilian researcher whose team sequenced the novel coronavirus genome in near-record time, to a Stanford MD who is sounding the alarm about how diet and lifestyle changes could help populations better combat pandemics, to a public health official who was instrumental in creating the “social distancing” strategy for slowing the spread of infectious disease over a decade ago, these women have truly made an impact on healthcare around the world.

These are the women healthcare leaders you should get to know in this year.

Theresa Tam, MD has been Canada’s Chief Public Health Officer since 2017. While she has held many roles during her tenure in the country’s Public Health Agency (PHAC), she was perhaps never as widely recognized by her countrymen until the outbreak of COVID-19; the crisis has thrust her into the public spotlight, giving regular televised press briefings and status updates.

This public scrutiny has, at times, posed challenges for Dr. Tam, whose birthplace of British Hong Kong has invited xenophobic remarks from opposition groups and politicians.

Despite this, Dr. Tam has remained laser-focused on the job at hand, slowing the spread of the virus. Canada currently counts just over 80,000 confirmed cases, while its more populous neighbor has 1.5 million confirmed cases.

Ester Cerdeira Sabino, MD is the director of the Tropical Medicine Institute at the Universidade de São Paulo in São Paulo, Brazil.

The institute studies blood communicable diseases prevalent in the region including Chagas and sickle cell disease.

When the first case of COVID-19 was reported in her country on February 26, her team, along with researchers from the Adolfo Lutz Institute of Brazil’s Ministry of Health, raced to sequence the genome of the virus at breakneck speed.

Her team was able to sequence the genome in 48 hours, on par with some of the fastest researchers in more developed European countries.

After the accomplishment, Dr. Cerdeira told the BBC, “We wanted to do it in 24 hours, beat the record, but it didn’t work (in the process). We did it in 48 hours, like the Pasteur Institute (in France).”

Regardless, Dr. Cerdeira Sabino and her team’s work was an important accomplishment for Brazilian science.

Katelyn Gleason had little to no experience in the healthcare space when she joined DrChrono, a healthcare billing platform backed by Silicon Valley technology accelerator Y Combinator, in 2010.

In fact, at that time, she was an aspiring actress. But Ms. Gleason quickly excelled and helped scale DrChrono, eventually, branching out to start her own healthtech venture in 2011, Eligible, a medical billing startup also backed by Y Combinator that’s received investment from some of Silicon Valley’s most influential investors.

Eligible integrates with medical systems to provide patients and doctors with instant feedback about whether certain medical procedures or appointments with specialists will be covered by the patient’s insurance provider, and what the patient’s copay is likely to be.

During times of uncertainty surrounding COVID-19 testing, this kind of clarity can help bring peace of mind to patients suffering from COVID-19 symptoms, some of whom after getting tested were surprised with exorbitant medical bills in tens of thousands of dollars.

Roopa Dhatt, MD has championed female leadership in front of some of the world’s most influential bodies.

In a recent op-ed, she called on the World Health Organization (WHO) member states along with other international agencies, non-governmental organizations and the media to “include women — particularly women from the global south — as 50% of global health security decision-making bodies and expert groups.”

An internist by training, Dr. Roopa previously held roles at Kaiser Permanente and University Hospitals, a healthcare system based in Northeast Ohio.

Casey Means, MD is a Stanford-trained physician, entrepreneur, and writer. Emboldened by the modern reality that the majority of human suffering, mortality, and healthcare costs are a result of preventable lifestyle-mediated illnesses, her mission is to improve human health and longevity by empowering individuals to make positive, personalized dietary and lifestyle choices by enabling access to personal health data and digital health tools that foster lasting behavior change.

This mission led her to start the metabolic digital health company Levels (of which she is now Chief Medical Officer), to support the research community as an Editor of the International Journal of Disease Reversal and Prevention, and guides her clinical practice as a Functional Medicine physician.

Dr. Means’s expert perspective on health promotion and digital health has been featured in Forbes, Entrepreneur Magazine, Business Insider, Endocrine Today, Endocrine Web, Startupbeat, Healthy Human Revolution, Well + Good, and more, and she has recently published in TheHill.com and Metabolism with articles about the strong relationship between chronic lifestyle diseases and COVID-19 mortality.

She is an award-winning biomedical researcher, with numerous scientific journal articles and past research positions at the National Institutes of Health, Stanford School of Medicine, and NYU.

Dr. Caroline Buckee is an associate professor of epidemiology at the Harvard TH Chan School of Public Health and the Associate Director at the Center for Communicable Disease Dynamics.

Her life’s work has been spent understanding how infectious diseases spread by creating mathematical models and using data analytics.

Dr. Buckee has also been a champion of women in science, having recently co-authored an opinion editorial in Times of Higher Education highlighting how the “scientific response to Covid-19 has been characterised by an extraordinary level of sexism and racism.”

Dolmarie Mendez is the co-founder and CEO of Abartys Health, a Puerto Rican healthcare data company that services the United States healthcare market.

Ms. Mendez had worked for decades in the insurance industry before co-founding Abartys Health with Lauren Cascio.

The two female founders are no strangers to crisis, having kept their startup running during the fallout from Hurricane Maria, which slammed Puerto Rico in 2017.

Alexa Olteanu is the COO of Talos Digital, a software development firm developing solutions for many breakthrough healthtech companies around the world.

The company operates across three countries, the United States, Canada and Colombia.

Outside of the healthcare space, she’s also developed projects for large corporations including Shell and CISCO.

Michelle Nunn doesn’t come from a healthcare background. She studied public administration at the Kennedy School of Government at Harvard University.

But when health crises strike across the globe, Ms. Nunn and the organization she leads, Care USA, are normally on the scene to help.

Having provided support for healthcare disasters like the Ebola outbreak in West Africa, as well as outbreaks of cholera and Zika in other parts of the world, Care USA has carved its place as a leading humanitarian organization in times of health scares.

Focused on helping some of the world’s most vulnerable populations during the latest COVID-19 health emergency, the organization has provided essentials like soap, hand washing stations, and water storage tanks in Mozambique, Bangladesh, Somalia, and Syria.

The organization is also translating WHO health advice into local languages to help combat the spread of misinformation throughout local populations about the COVID-19 pandemic.

Dr. Lisa Koonin worked for over three decades at the Centers for Disease Control and Prevention (CDC) where she helped the agency plan for national and international viral epidemics.

During the early aughts, Dr. Koonin was a leading expert, along with Drs. Richard Hatchett and Carter Mecher, in establishing a key strategy being implemented by health officials in the current COVID-19 pandemic: social distancing.

After leaving the CDC in 2018, Dr. Koonin has held various professorships at leading universities and has established Health Preparedness Partners, a consultancy for corporations and health organizations for prepare for disease outbreaks.

With the outbreak of COVID-19, Ms. Von Bidder and company teamed up with researchers from Liechtenstein to utilize Ava in a study to understand whether its wearable technology could help detect symptoms of the novel coronavirus.

Ava bracelets are being handed out on a voluntary basis to a grouping of research subjects involved in previous studies from the Liechtenstein-based lab, which according to a statement from Ava, represents over 5% of the tiny country’s population.

Ajala Ngarndi, MD is an emergency room physician who has worked in hospitals and clinics across New York and Georgia.

She currently leads the Atlanta division of The IV Doc, a hybrid telemedicine and house call service operating in 32 locations around the United States and Europe.

With the onset of COVID-19, telehealth has become increasingly popular as patients with non-life threatening illnesses are encouraged not to visit hospitals or clinics for non-urgent check ups to avoid spreading the virus.

The company recently launched at-home COVID-19 and antibody testing which involves a video conference call with the patient’s physician while a fully equipped registered nurse performs the test in-person.

Founder Institute (FI) is the world’s largest pre-seed startup accelerator, active in over 185 cities around the globe and headquartered in Silicon Valley.

In May the accelerator announced the new fellowship program which provides qualified applicants from anywhere on Earth that are building companies to solve public health issues with free access to the Founder Institute program and its Silicon Valley-based mentors.

Irene Bosch, MD has worked as a researcher in the laboratory of Dr. Lee Gehrke at the Massachusetts Institute of Technology for over 11 years and is also an adjunct professor of medicine at New York’s Mount Sinai School of Medicine.

Similar in look and feel to common home pregnancy tests, E25Bio’s team recently developed a COVID-19 home testing kit that informs the patient if proteins found in COVID-19 are present in the patient’s saliva after applying spittle to a narrow strip on the end of a test stick. The company is currently seeking approval of the test kits by the Food and Drug Administration.

Disclosure: This article includes clients of an Espacio portfolio company.