Ulster Bank have launched a free mobile banking app in Ireland for the iPhone.

The app provides simple banking services allowing its customer’s to check their balance, view mini statements, and receive text alerts when their balance falls below specified limits. Up to ten accounts can be registered on the app. 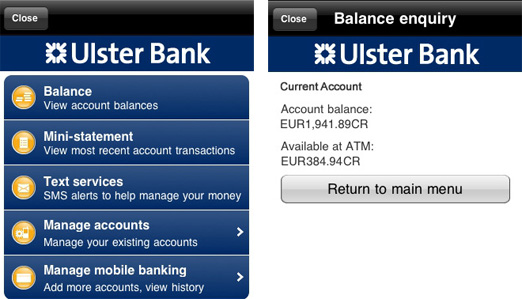 Glynis Hobson, head of Direct Banking at Ulster Bank, said: “Earlier this year we asked our customers about the product and service improvements they’d most like to see from Ulster Bank. When customers told us that they would value a text service which would help them avoid being overdrawn on their account, we decided to make that a reality with a new iPhone app. This means our customers can take action to avoid unnecessary charges.”

This latest move by Ulster Bank is part of a conjoined effort to make its banking service’s more accessible. Last month the bank announced extended opening hours and Saturday openings in selected branches.

The app uses Monitise’s iPhone app platform to deliver Ulster Bank’s mobile banking services. Alastair Lukies, chief executive officer of Monitise, said: “We are very proud to have launched, with Ulster Bank, the first app of this type in the Republic of Ireland.

“Mobile banking is now part of the mainstream of modern banking and we’re delighted to be at the heart of its collaborative development around the world.

The app can be downloaded here from the Apple App Store. After downloading the app a number of security steps must be undertaken first, which can take up to twenty-four hours to complete.

Would you use an iPhone app to perform your basic banking services? Let us know in the comments.