Flashback: The media reacts to the announcement of the first iPhone

As Apple prepares to announce the latest edition to its iPhone family we take a look back five and half years when the company unveiled their very first smartphone.

Apple announced the first iPhone on January 9 2007 and looking back then it’s possible to see how revolutionary the device was.  Back then the media asked if Apple could capture lightning twice and repeat the success of the iPod?  And, more fundamentally, would people even like using touchscreen devices.

Techcrunch warned its readers that the “waiting list [will] be huge” when the phone was released.  Information week asked if the phone was “up to snuff with the smartphones on the market today.”  Ink.com described their iPhone envy, “a quick look at the specs on Apple’s website makes me look askance at my brand new BlackBerry Pearl (and every other cell phone, for that matter)” and asked, “How could you not love this thing?”

The Associated Press wondered if the iPhone could emulate the success of it’s big brother, the iPod;

“But it remains to be seen whether the $500 gadget and other products announced Tuesday will allow the company to remain a Wall Street darling and sustain the market dominance enjoyed by iPod, Apple’s iconic digital music player. Some industry veterans wonder whether the phone despite its slim elegance and wide-screen display is priced competitively.”

The AP also reported the beginnings of the slow slide of other smartphone manufacturers.  They noted that, on the announcement of the iPhone, Palm’s (remember them?) share price dropped 5.7%; Blackberry maker, RIM’s, shares slid 7.9%; and Motorola fell by just 1.8%. Samsung’s share price fell1.4% in South Korea “on concerns about fiercer competition after Apple Computer Inc. ”

In 2007, some wondered if the iPhone could become as successful as the iPod

On January 10, 2007, ABC’s Robin Roberts described the iPhone as “new generation of gadget that’s a phone, iPod, computer, even a camera, all rolled up in one.”  She added, “I don’t know what it is, but I want it.”

The same day Mac Observer’s Dave Hamilton, speaking to ABC News’ John Hendren, described the concerns that some had about moving from keypad devices to full touchscreens;

“That’s [the iPhone’s touch screen] one of the things about the iPhone, right? It’s got limited buttons. There’s the, the one on the front, and then, of course, the one to switch between ringer and, and vibrate. But that could be its downfall. That’s the, that’s the one thing that, honestly, I’m worried about is typing on a touch screen with no tactile response, dialing on a touch screen with no tactile response. That, that could be an issue. Now, again, we haven’t had our hands on it yet, so we reserve judgment, but that’s something we’re looking at.”

Australia’s The Advertiser said “The future is now” and asked “how might that [the iPhone] fit into the scheme of things?”

Of course some things never change.  As soon as the iPhone was announced the media reported that Cisco had filed a case against Apple over the use of the iPhone name, which Cisco was using for a VOIP device.  Cisco’s senior vice president, Mark Chandler,  said

“There is no doubt that Apple’s new phone is very exciting, but they should not be using our trademark without our permission.”

You can still see the impact of the iPhone today, as this ComScore chart shows 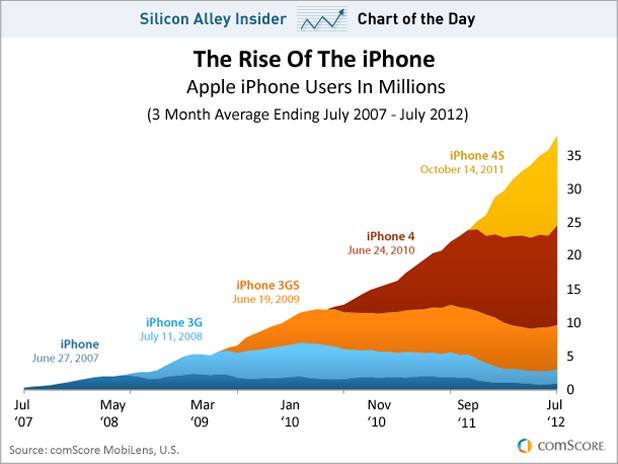 The reports were often conservative but rarely wide of the mark.  Many even hinted at things to come, such as the decline of Palm and BlackBerry, but most recognized how the iPhone was a game changer for the industry.  We’ll just have to wait a few more hours to see what the reaction is to the iPhone 5.