‘We want diverse backgrounds in AI, so everyone brings their different perspectives’: TheAcademy.Ai 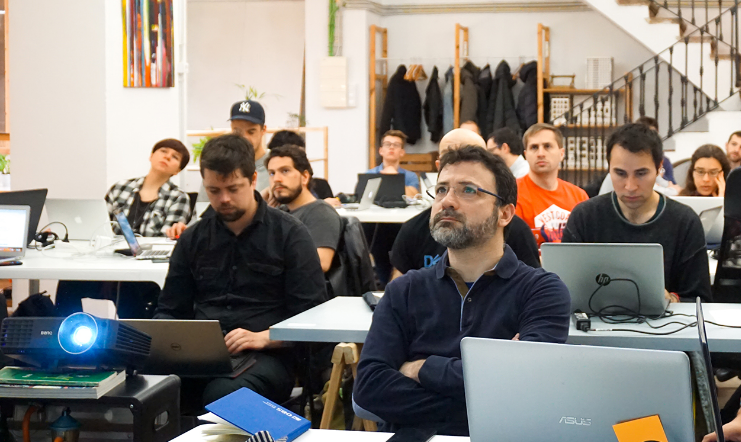 Spain’s TheAcademy.ai sees young startup founders, doctors, bankers, and people with diverse backgrounds wanting to learn the role of AI in their own professions, and this diversity brings different perspectives to the code.

Artificial intelligence (AI) might be feared as a potential threat to many jobs due to automation; however, it is also creating jobs and is expected to create many more in the near future.

Chatbots are taking over all sectors that involve human machine interaction like etail (e-retail), finance, medicine, and education. Voice assistants like Alexa and Siri are the stars of tech giants like Amazon, Apple, and Google.

As AI becomes more prevalent, Barcelona-based TheAcademy.ai wants more professionals from diverse backgrounds to get involved with AI, so that their unique perspectives can help with the innovation.

“We want to get more people from diverse backgrounds into AI, so that everyone brings their different perspectives”

Jan Carbonell, Co-Founder and CEO of TheAcademy.ai, told The Sociable that we don’t yet have enough AI experts being produced, although the demand from businesses is high. TheAcademy.ai is a startup in Spain that has set its sights on teaching people about AI with a basis in ethics.

Carbonell participated in a discussion on AI as the Ultimate Challenge of the Human Condition at the Horasis Global Meeting that took place in Cascais, Portugal, from April 6-9.

Not Enough AI Experts in Spite of Burgeoning Applications

As an example in Spain, the young entrepreneur says Barcelona sees 300 applicants for masters courses in AI annually, out of which, only 40 get selected.

A master’s course being extremely intense and complicated, 10 drop outs are expected. That means only 30 AI experts are being produced by Barcelona. Counting another 30 from Madrid, 70 people graduate with an official degree in AI every year from Spain.

In the last few years; however, institutes that teach AI don’t see any dearth of applications. AI courses are starting to burgeon with ambitious students.

There has been an almost 30% increase from 2017 in the number of Indian students going for a specialized master’s in AI instead of a general master’s in business administration or MBA.

In the US, according to numbers from Data USA in 2016, the locations with the highest concentration of AI graduates were Pittsburgh, PA, Philadelphia, PA, and Seattle, WA. The most common degree awarded to students studying AI remains a Master’s Degree.

AI is a dominant constituent of nine of the 20 programs at Carnegie Mellon’s School of Computer Science. Last year, the institute’s AI master’s degrees experienced the highest spike in applications.

At the University of Amsterdam, the total number of students pursuing this course in 2018 academic year was 279.

In Belgium, KU Leuven’s one-year advanced master’s program saw an overall increase of 44% in applications in 2017. Danny De Schreye, study advisor for the programme told The Economic Times, “AI has been taken up considerably in industry and companies need to recruit AI specialists.”

Richard Watson, senior lecturer and program coordinator at the University of Southampton, told ET that the master’s in AI course packs a certain amount of ‘cool’ quotient, which is resulting in the increase in applications.

“Successes in machine learning, in particular deep learning, and other areas of AI have been big news recently, for example with investment and jobs in enterprises such as Google DeepMind and the success of AlphaGo. High-profile applications on the horizon, such as driver-less vehicles, also fuel interest,” Watson said.

Yet, Carbonell says, looking at the numbers on LinkedIn, if one happened to tag people working on AI, the number is only 11,000.

The fact remains that AI, as a course, is mighty complicated. The pre-requisites of a course in AI include discrete mathematics, programming skills, especially languages such as Prolog and LISP, propositional and predicate calculus, modal logic, and then some. This will only form the basis for studying AI.

Maybe there is a need for a more informal approach to AI, so that professionals who want to understand and hence leverage the power of AI in their existing but growing sectors can do so without being completely overwhelmed by it. There might be surprising results, as Carbonell found out.

After gaining a master’s in AI himself, Carbonell started a project that is happening in 10 cities at the moment, where they teach AI for non-profit, charging a minimal fee. He says much diversity is starting to enter this field of study.

“We want to get more people from diverse backgrounds into AI, so that everyone brings their different perspectives,” he says.

The Academy.ai sees business people, young startup founders, doctors, bankers, and people from many other sectors wanting to learn the role of AI in their own professions. He is also seeing people who see it as an opportunity to retrain themselves, like programmers. Such a mix, he says, is desirable.

“They see the power of data. They agree on the fact that data is going to continue to grow, and we will be able to transfer more data at faster speeds. So, they just see AI as an inevitability,” he says.