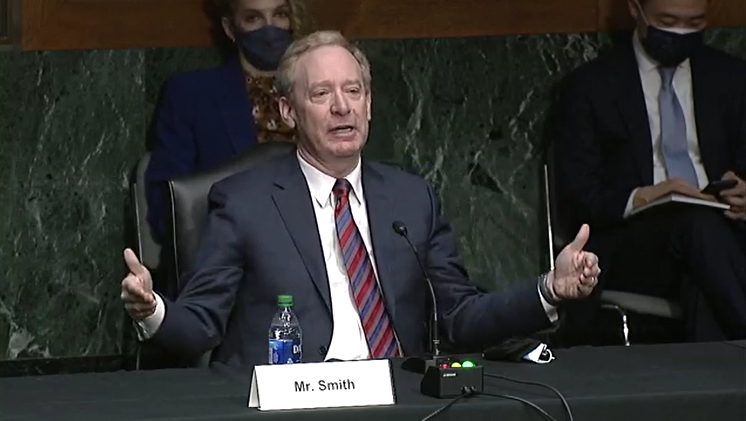 Microsoft President Brad Smith warns lawmakers that the US needs to strengthen its digital infrastructure and defenses because in the future, adversaries may very well being sending code instead of bombs to do their fighting for them.

“Think about a future where a nation need not send missiles or planes, but can simply send code to do its fighting for it” — Brad Smith

“If you think about American history, geography has always been our friend. We could look not to one large ocean but two to keep our adversaries at a distance,” said Smith.

“But the truth is the internet has changed all of that. It has made everybody each other’s next door neighbor.”

The recent hack on the outdated computer system of a water treatment facility in Florida shows how the hyper-local services that you depend on for survival, like water or electricity, can be compromised by bad actors operating at a distance.

“This is changing the threat landscape, and it unfortunately favors offensive attacks against a very broad defensive horizon that must be secured” — Brad Smith

The president of Microsoft looked to the power outages sweeping across Texas due to the unusual cold, and warned the Senate committee members that in the future, nations could cause similar harm Americans by taking out power grids with code instead of bombs.

“Think about what happened when the electrical grid went down in Texas,” he said. “Think about the danger to American civilians if there is a disruption of the water supply.

“And then think about a future where a nation need not send missiles or planes, but can simply send code to do its fighting for it.”

Smith went on to say that, “Over time technology either favors offensive weaponry and attacks, or defensive protection against attacks.”

“This is changing the threat landscape, and it unfortunately favors offensive attacks against a very broad defensive horizon that must be secured,” he added.

According to Smith’s written testimony, America should pursue a digital defense strategy with seven objectives:

The number one thing that the US should do, according to Smith, is “strengthen the nation’s digital infrastructure and digital defenses,” and to lead with American values.

“We do in fact have a set of human rights protections and democratic values that can pull the world together,” he said.

Smith’s words echo those of fellow witness Eric Schmidt, who in the same hearing said, “It’s important that American values — the things that we hold and cherish so deep — are the winners in all these technological areas.”

Both witnesses agreed that public and private sector cooperation would be needed to bolster national defense while countering China’s advancements in emerging technologies, and that one of America’s greatest strategic advantages was its global network of allies and partners.

The written testimonies and the livestream playback from the hearing may be found here.