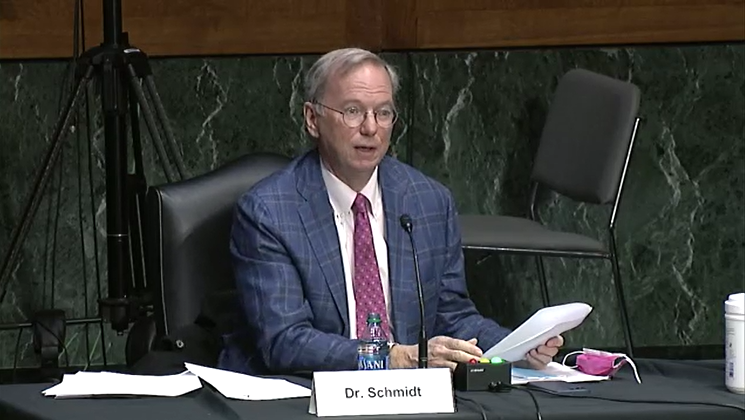 Ex-Google CEO Eric Schmidt tells the Senate Armed Forces Committee that the Pentagon’s long design cycles are killing American competitiveness with China, and that, “We need to build missiles the way we now build cars.”

In his opening statement before the Senate Armed Services Committee on Tuesday, Schmidt told lawmakers that the Pentagon should look to how car companies operate to speed up innovation and production for national defense.

“We need to build missiles the way we now build cars,” he said, adding, “It turns out that the modern car plan designs everything in a design studio, knows everything where one presses a button and boom! all that comes out, and they work really, really well.

“The [Pentagon’s] bespoked design approaches […] are completely counter to the way a Silicon Valley company would operate.”

“We need global platforms, or we’ll be forced to use the Chinese ones, which would be a disaster!” — Eric Schmidt

According to Schmidt, China is pushing to meet or beat the work of the United States in each of the following areas:

“These are contests of values as well as investments,” said Schmidt.

“It’s important that American values — the things that we hold and cherish so deep — are the winners in all these technological areas,” he added.

“Synthetic Biology: The building of life. China is busy building a biobank and is trying to come to global domination in a number of key areas” — Eric Schmidt

“The important thing here is that the private sector is America’s great strength,” said Schmidt.

“We move faster and [more] globally than any government could. Fast, iterative design and product cycles are the key to competitiveness, and we need global platforms, or we’ll be forced to use the Chinese ones, which would be a disaster!” he added.

The former big tech CEO also highlighted that the Pentagon “treats software as a very low priority,” and that “it needs to be treated as a very high priority” because “software is going to drive pretty much all of the interesting accomplishments in a national security sense in the next 10 to 20 years.”

“Fast, iterative design and product cycles are the key to competitiveness” — Eric Schmidt

Speaking from his position as a commissioner for the National Security Commission on AI (NSCAI), Schmidt proposed that the government adopt the forthcoming NSCAI recommendations that will be published on March 1, 2021 (a draft copy of the final report is available here).

Some of the recommendations from the NSCAI draft include:

Their written testimonies and the livestream playback from the hearing may be found here.