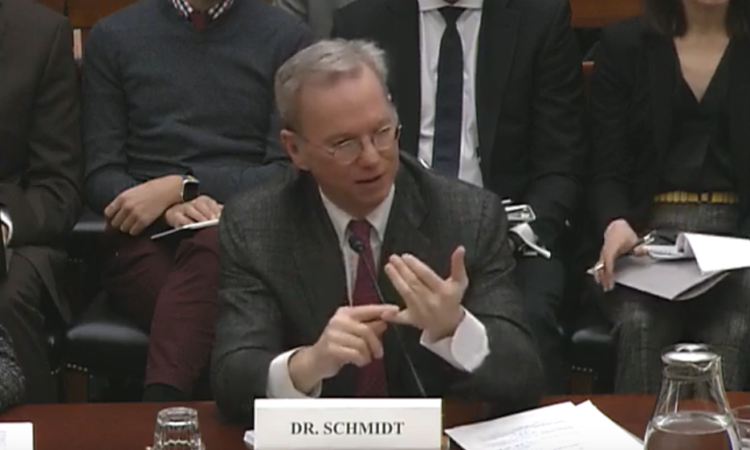 Ex-Google CEO Eric Schmidt presents six proposals for the US to remain competitive with China in critical technologies during a hearing in the House Committee on Science, Space, and Technology.

Today, Schmidt, along with National Science Board Chair Dr. Diane Souvaine, and Georgia Tech Executive VP for Research Dr. Chaouki Abdallah all gave testimony in a hearing called “Losing Ground: US Competitiveness in Critical Technologies” before the House Committee on Science, Space, and Technology.

“My concern is that China tries to fulfill a vision of high-tech authoritarianism.

For the US to remain competitive in critical technologies, the panel of three witnesses in Wednesday’s hearing agreed that China was the biggest competitor and that China did not play by the rules.

Dr. Schmidt gave the committee six strategies for staying ahead of China, which were loosely:

Collectively, the witnesses agreed that to compete with China, the US needs to double its R&D funding, build more public and private collaborations with academia, and do it all with American values.

US Critical Technologies Competition With China

“At the moment we are ahead [of China] in AI. We’re ahead by some number of months or years and the number is not large” — Dr. Eric Schmidt

China’s authoritarian use of technology and its massive theft of intellectual property make it the biggest counterintelligence threat to America.

“My message today is one of urgency,” Schmidt said in his opening statement, adding, “China is clearly and aggressively trying to close the lead that we have between them in emerging technologies.”

“In a most recent public announcement they said that they wish to lead and surpass the United States in the following areas: quantum communications, super-computing, aerospace, 5G, mobile payments, new energy vehicles, high-speed rail, financial technology, and AI — which is everything I do.”

He added, “At the moment we are ahead in AI. We’re ahead by some number of months or years and the number is not large.”

“Our model, which is a model of a free and open society, with people coming in, new ideas, and so forth, should be the model that wins, but it’s under challenge today.”

“My concern is that China tries to fulfill a vision of high-tech authoritarianism. That governing model will appeal to other governments searching for a foundation on which to exercise their power,” Schmidt added in his written testimony.

What did the other panelists have to say about strategies to benefit American competitiveness?

Government Strategies That Would Benefit US Competitiveness

Ranking Member Frank Lucas asked the witnesses what they would like to see in a process for whole government strategy for science and technology, and how that would benefit US competitiveness. Here are some highlights.

“We need to prepare our domestic students from every zip code and every background to think creatively with the STEM concepts that touch every area of our lives” — Dr. Diane Souvaine

Dr. Souvaine expressed the need for the US to invest in STEM research and for the US to prepare its students to think about STEM through the lens of American values.

“I think that the US needs to compete with values, talent, partners, and research infrastructure,” she said.

“We need to nurture homegrown and foreign-born talent to build our STEM-capable workforce.

“We need to prepare our domestic students from every zip code and every background to think creatively with the STEM concepts that touch every area of our lives.

“We need to invest in critical areas of basic and applied science while supporting public sector partnerships and development.

“And we need to be a reliable global partner and collaborator,” she added.

“Most importantly, investing in infrastructure is key” — Dr. Chaouki Abdallah

Dr. Abdallah also stressed the need for collaborations to grow ideas over time.

“The basic research that we do at the universities in many cases is leading to ideas that may not be today implementable or has economic impacts,” he said.

“But it would need support between the lab and getting a large company or an investor to go in there facilitating that or encouraging policies to do that would be extremely important.”

“Most importantly, investing in infrastructure is key,” he added.

“We need to strengthen those links between federal agencies, the military, private sector, academics in all sorts of ways” — Dr. Eric Schmidt

The former Google CEO said, “The United States got to where we are because of a unique combination of government, academia, and private sector collaboration.

“We need to strengthen those links between federal agencies, the military, private sector, academics in all sorts of ways.

“The general answer is more of what we’re doing at a global scale.

“We have the talent. People want to come to our country. People are incredibly creative here, and we have a strong challenger in China, which runs under a different system we don’t like.”

“Virtually all of Silicon Valley was either DARPA funded or National Science Foundation funded, or university funded” — Dr. Eric Schmidt

Schmidt, who chairs the Defense Innovation Board, emphasized the need for the US government to increase its funding into research programs because companies like Google would never have been born without them.

“When I was a graduate student, I was funded by national science funding as well as DARPA funding. Without that funding, I would not have been able to do the kind of research that at the time allowed my career to become what it is today,” he said.

Dr. Schmidt said that startup founders today stand on the shoulders of giants who were funded through governmental programs going back to the end of the Second World War.

“Virtually all of Silicon Valley was either DARPA funded or National Science Foundation funded, or university funded through that mechanism.

“Today, all of the leading technology companies are very integrated with their university counterparts. It’s very symbiotic. Let’s not screw that up,” he added.

“The Trump administration has taken good steps towards protecting American IP from Chinese aggression, but we must do more” — Ranking Member Frank Lucas

According to Ranking Member Lucas, “The US is facing two fundamental challenges to our competitiveness and growth as a nation.

“First, foreign countries, especially China, are threatening to outpace us in scientific research and development.

“Second, we must respond to the changing climate and develop next generation technology to understand it, address it, and mitigate it.”

He added, “China has made it an explicit goal to surpass the US in critical technologies. Their ‘Made in China 2025’ initiative is a bold plan, which outlines their intent to become global leaders in areas like quantum information science, advanced robotics, aerospace, and biotechnology.”

“We must protect our nation’s research and intellectual property. The Trump administration has taken good steps towards protecting American IP from Chinese aggression, but we must do more to protect sensitive American research while maintaining the spirit of open science that has fueled generations of discoveries.”