All Android’s wishes come true with 3.7 million activations this Christmas 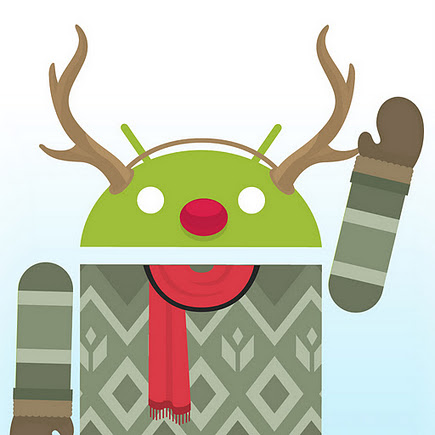 Google had a very merry festive season this year with over 3.7 million Android activations on Christmas Eve and Christmas Day, according to Google’s Senior Vice President of Mobile, Andy Rubin.

Rubin, who co-founded Android in 2003 before it was acquired by Google in 2005, took to Google+ to make the announcement adding to previous news that 700,000 Android devices are now being activated every day. This is up from 500,000 earlier in the year.

Whether Flurry’s definition of an activation matches Google’s we’re not sure.  Earlier in the week Rubin clarified how Google counts the number of activated Androids, “we count each device only once (i.e., we don’t count re-sold devices), and “activations” means you go into a store, buy a device, put it on the network by subscribing to a wireless service.”

The Christmas Day activation spike, Flurry reports, was up 140% on Christmas Day 2010, the previous record holder.  If their and Google’s data is accurate then that would suggest that roughly about 3.1 million iOS devices were activated this holiday season.  We’ll report more on this if Apple releases its figures.

The company also reports that 242 million smartphone apps were downloaded on December 25 up 125% from 108 million for the rest of December.  7pm to 9pm was the app download prime time, although Flurry says that elevated downloads were seen throughout the day, with the spike beginning at 7am and ending at 4am on December 26; 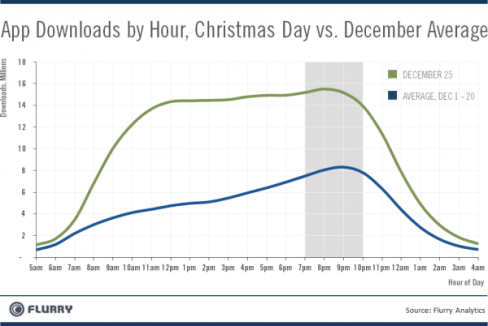 On Christmas Eve 150 million apps were downloaded.  This number is probably down to people downloading apps before they gift the device and those who exchange gifts on December 24. Over the Christmas Week, until New Years Day, the company expects over 1 billion apps to be downloaded.