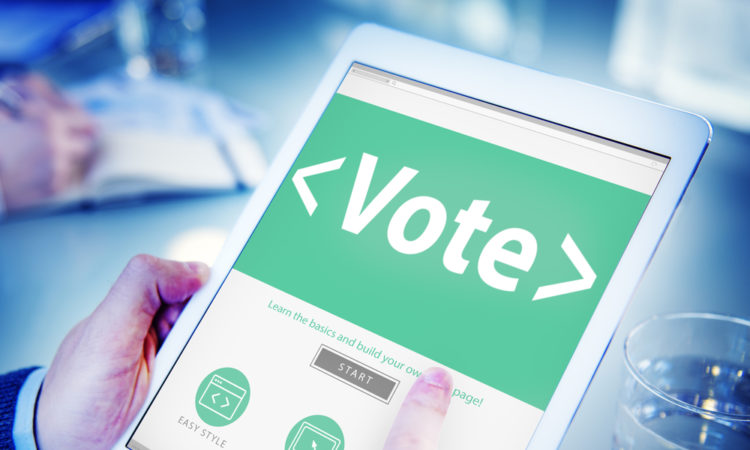 Earlier this month, Utah County, UT, demonstrated its use of a blockchain-based voting system.  What efforts are being made at implementing such systems, what problem do they seek to solve, and are they providing that solution?

On his campaign website, he lists it as a campaign policy and states that “it’s ridiculous that in 2020 we are still standing in line for hours to vote in antiquated voting booths”.

He goes on to claim that such an implementation would “revolutionize democracy” on the basis that blockchain makes it possible to facilitate fraud-proof voting on mobile phones.

Utah County deemed its mobile voting pilot to be a success.  It allows users to scrutinize individual blocks on the blockchain as part of an open auditing process.

In this way, it can be determined if candidates have received the votes they aught to have.

Why the Need for Blockchain?

Centralized e-voting systems have been in existence for years.  However, they have never fully gained public trust, proving to be controversial.

Some years ago, Ireland planned to introduce a national e-voting system but the government was forced to scrap it amid a backlash of public distrust.

Blockchain as a technology has been developed on the basis of a “don’t trust, verify” approach at its core.  The nature of the technology is such that it provides for an immutable ledger that can be audited and in principal, can’t be tampered with.

Read More:  How polls influence votes in the American election

It’s for this reason that governments and public administration authorities globally are looking at mobile voting solutions based upon blockchain technology.

If this technology can provide the key towards trusted electronic voting systems, then the obvious advantage is the opportunity to cut out voter fraud.

However, there are further knock-on benefits.

The convenience of mobile voting means that voter turnouts can be increased whilst the spend on the overall voting process can be reduced significantly.  In 2018, West Virginia became the first US state to employ mobile voting in a federal election.

Subsequent research carried out by a University of Chicago student found that the ability to vote using a mobile device had increased voter turnout by 3-5%.

Such systems enable greater participation in the democratic process by those with disabilities, the aged and the public generally due to the greater level of accessibility and convenience.

Voatz is the firm behind the Utah County vote.  The company has been using a Hyperledger blockchain for its voting system application.

However, Hyperledger is a private permissioned blockchain and when run with few network nodes, it’s questionable as to whether it leads to the Voatz system being anything better than a centralized database.

Earlier this year Russia’s ruling party, United Russia, launched a site for preliminary voting in the country’s primaries with the utilization of blockchain technology.

Prior to the vote, a French security researcher found a critical vulnerability in that voting system.  The researcher cited the use of encryption key sizes that were too short, making the system insecure.

Poor system design would appear to be the culprit in this instance.  However, in their defense, the developers of the system – Moscow Department of Information Technology – had published the source code on Github with the intention of exposing it to the probing of the infosec community in order to discover any vulnerabilities prior to deployment.

Prior to the vote, election monitoring organization, Golos, were critical of the voracity of the system.

On election day, it was trialed in three precincts and whilst it was reported to have gone down twice during the day, voter turnout for those registered to use the system was as high as 90%.

Blockchain offers some potential and a means through which security can be improved when it comes to e-voting. However, in it’s current form, it’s unlikely to be a completely impenetrable solution.  Such systems are only as good as they are designed.

Whilst we can expect system design to improve, there are other issues still.

The system itself may be secure but its seems next to impossible to guarantee that individual voters phones cannot be compromised.  One of the other issues with blockchain for this use case and for many others such as supply chain use, is that it’s only as good as the information that’s input on it.

In the context of voting, how can we be sure that the vote cast is being cast by the person registered on the system?

Some systems like Voatz use biometric authentication, but it remains to be seen if this is fail-safe.

Blockchain may provide the solution to enable mobile voting but its far too early in its development to justify widespread roll-out right now given that the public must have complete confidence in a system that facilitates the democratic process.