HomeTechnologySaviors in the Sky: could drones save 100s of construction workers’ lives each year?
Technology

Saviors in the Sky: could drones save 100s of construction workers’ lives each year? 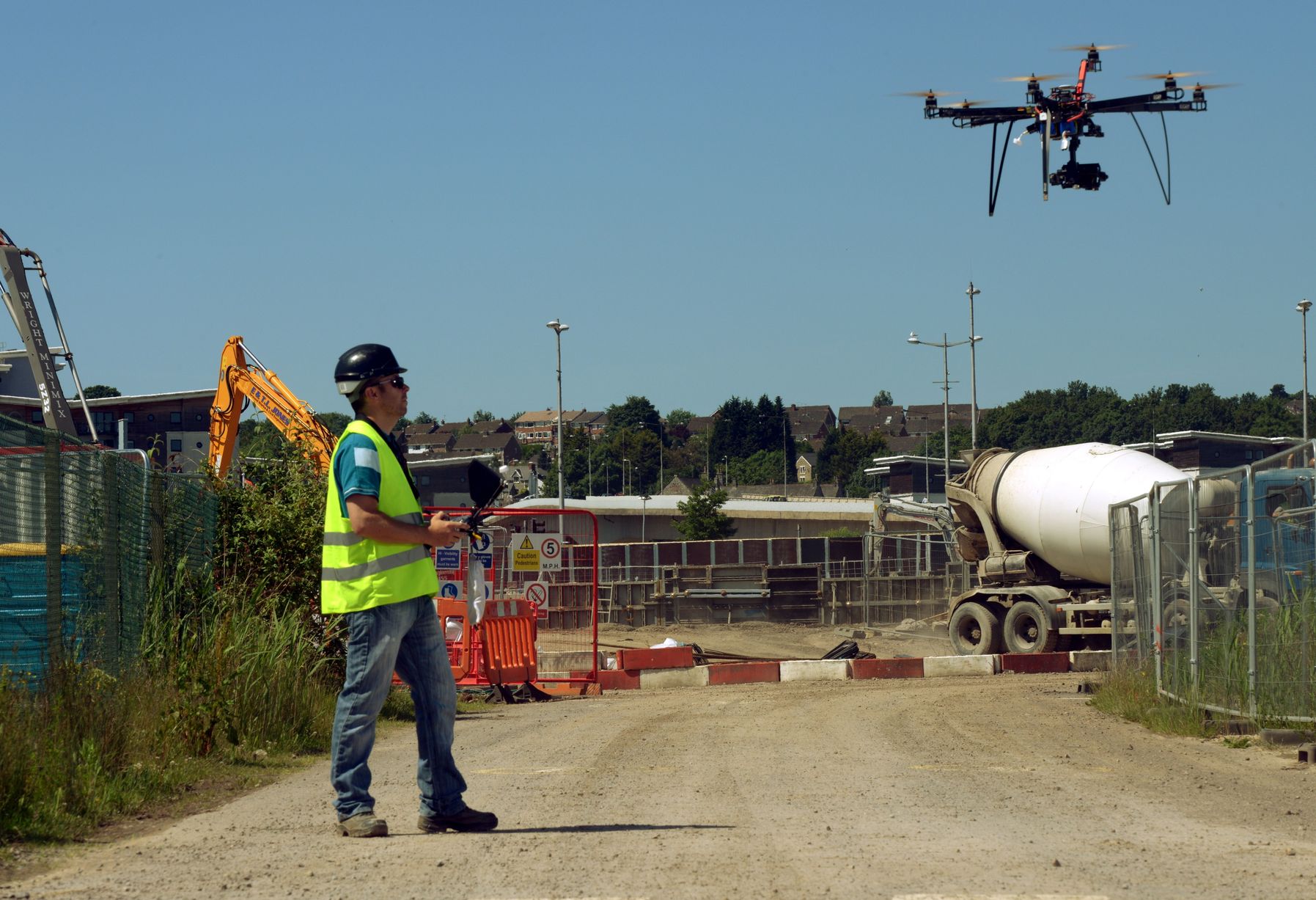 With leaps forward in camera and AI tech, drones are now able to undertake a range of industry functions which go much further than simply capturing photos and video.

Drones are disrupting a wide range of industries, and with increased interest in the field from industry leaders and investors, the technology is advancing rapidly. From scanning for subtle signs of damage using machine vision, to site management and monitoring equipment on work zones, drones have quickly moved from the realm of a fun accessory for camera enthusiasts, to an indispensible multi-billion dollar tool.

According to the Occupational Safety and Health Administration (OSHA), one in ten construction workers are injured each year, and other manual labor industries like gas, electricity, and mining have high casualty rates too. To date, drones have mostly been used in the fields of surveying and inspection, but with industry sites and work zones being notoriously dangerous places to work, how could drones be used to save lives and reduce injuries?

According to the OSHA, 4,821 workers died at work in 2014 in the US alone, with the highest rates of worker fatalities occurring in mining, construction, manufacturing and agriculture. The highest number of fatalities for any industrial sector are in the construction industry. More than 135,000 injuries of construction workers were recorded on site in the US in just one year, 1,178 of which were fatal injuries. The most common causes of fatalities on site are known as the ‘fatal four’, with deaths resulting from falls, becoming stuck in machinery, being struck by falling objects, and electrocution.

Sites are often remote, or hard to access, which makes it difficult to provide quick response medical attention, especially if the injured worker is located at a hard to reach spot such as a construction tower, scaffold or mineshaft. High fatality rates can be attributed to the slow response time of the emergency services – approximately 10 minutes on average – as brain death normally occurs within 4 to 6 minutes after a subject suffers cardiac arrest.

So how can drones save thousands of lives each year?

The most common cause of death on industry sites is due to falls from heights. Workers regularly need to work on scaffolds, and use rope access for hard to reach spots to complete repairs, and survey for damages.

At the beginning of 2015 there were 270,00 wind turbines registered globally and according to Navigant Research, the “cumulative global revenue for wind turbine UAV sales and inspection services” is expected to reach nearly $6 billion by 2024. Rope access specialists were traditionally used to manually check these wind turbine structures – which can be as high as 600ft tall – and this has led to multiple accidents and fatalities worldwide. To combat this, inspection drones are being used to assess high structures for damages, meaning that human rope access teams don’t need to put themselves at risk to ensure machinery is properly maintained.

As drone technology advances, the need for human teams to put themselves in danger could be dramatically reduced.

Industry work sites are often very large, and have hundreds of employees working in small teams in hard to access areas. As a result, it can often take time for co-workers to notice an accident has taken place, and raise the alarm. These few minutes can be the difference between life and death for seriously injured workers. Industrial work zones often extend over huge distances of 100s of acres or more. Instead of the weeks or months it would take a human survey team, drones can cover this distance in minutes.

Drones are already being used to monitor workflow and improve efficiency on leading construction sites, but can also be used to improve safety. Effectively acting as a foreman in the sky, qualified managers could manage a number of zones at a time using aerial video-monitoring, and check that structures are safe, and that workers are adhering to safety regulations. In the case of a collapse, fire or other serious accident, drones can alert emergency response teams and log safety records.

The slow response times of emergency services in built up urban areas with high levels of traffic leads to roughly 1,000 lives being lost each year. The situation is made even more challenging on construction and work sites due to the hard to access terrain and structures where the majority of labor takes place.

Design firm argodesign thinks it has the answer. It has created a concept project of a one-person ambulance drone modeled on a standard quadcopter. The drone can fly automatically using GPS, or be flown by a remote human pilot, or a combination of both—and has space to carry a trained EMT directly to the scene of an accident in minutes. The drone can traverse urban areas much quicker than by road, and can land in tight spots such as roofs or anything larger than the size of a small car.

However, until ambulance drones become a reality, there is another type of drone which could save potentially hundreds of lives especially after incidents of electrocution – one of the most common causes of fatalities on work sites.

Designer Alec Momont worked with the innovation consultancy agency Living Tomorrow and University Hospital of Ghent to create a drone defibrillator (AED), which can fly essential life-saving medical equipment to the scene of an accident in minutes. The drone is equipped with a camera and audio equipment so a medical professional can talk people on the ground through the process of applying the defibrillator in the case of cardiac arrest.

Currently there are no OSHA construction standards that specifically require an employer to provide an AED at a construction site, so this new tech could potentially save thousands of lives all across the States.

Gas leaks due to ruptured or poorly maintained pipes and infrastructures are common incidents on construction sites and gas and energy sites, and can have devastating effects on workers and the environment as a whole. Research by the Environmental Defense Fund (EDF) found that methane leaks were common at every stage of the oil and gas supply chain. The organization states that until standards are imposed by the federal government, the leaks will continue to be a national problem putting the health and lives of workers and civilians at risk.

A partnership between NASA’s Jet Propulsion Laboratory in California and UC Merced’s Mechatronics, Embedded Systems and Automation (MESA) Lab has led to the creation of the Open Path Laser Spectrometer (OPLS), a quadcopter drone which is equipped with a methane gas sensor which was originally designed to be used on NASA’s Mars mission. New drones can reach areas that humans and other vehicles can’t reach and reduces risk for human teams on site.

Federal and state agencies conduct nearly 100,000 inspections every year to ensure that construction companies are maintaining safe working environment, but casualties and fatalities are still high in the U.S. Whether it be due to poor training, inefficient management of workers,  lax safety precautions or unsafe structures and equipment, over the course of a 45-year career, 1 out of every 200 construction workers will die from on the job injuries, an unacceptable number, that can be dramatically reduced using drones.

Using drones would allow regulatory organizations such as the OSHA to monitor multiple construction sites from the air, and spot infractions or possible threats, and then send human teams to conduct more thorough inspections. Drones can be programmed to check a specific zone regularly at intervals which would allow for regular updates and data gathering from multiple sites without the need for human monitors. Using machine learning and machine vision AI technology, OSHA experts could be notified only in the case that anomalies were detected.

With such high accident and injury figures, it is clear that technology needs to be harnessed to ensure all workers are kept safe and companies adhere to safety regulations. There are expected to be over 100,000 drone related jobs by 2025, with an estimated economic impact of $82.1 billion. While construction jobs have always had a degree of risk due to the locations and heavy machinery involved, industry leaders are increasingly investing in technology to prevent avoidable accidents and improve overall safety on their sites.

Dick Zhang is the CEO of Identified Technologies, a startup empowering industrial leaders to build faster with job site drone mapping and analytics.