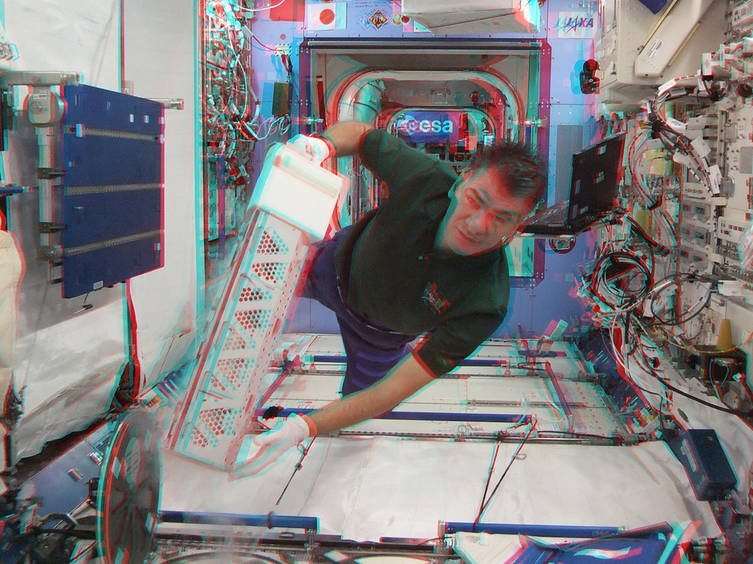 A European Space Agency astronaut, Flight Engineer Paolo Nespoli @astro_paolo, has been on tour in the International Space Station since January and during that time then he has taken some amazing 3D photos of the ISS and her crew.

The 3D anaglyph images were taken with a Fujifilm FinePix REAL 3D W1. The series of 14 photographs show the working life of the ISS’s 26th mission crew. Nespoli also included some images of his training prior to his departure for space.

The images are best viewed with red/cyan glasses.

The US educated, Italian astronaut was trained by NASA to work on the ISS by the ESA. This is his second time on the ISS, he was previously on board in 2007.

According to the ESA Nespoli’s six month mission will include scientific and educational experiments,

From December 2010 to May 2011, Paolo Nespoli, ESA’s Italian astronaut, will carry out an intensive programme of tasks, experiments and educational activities aboard the International Space Station. His duties include participating in the docking operations to receive two cargo spacecraft: Europes second Automated Transfer Vehicle (ATV) Johannes Kepler, and the second Japanese HII Transfer Vehicle (HTV). More than 30 experiments are planned during this mission, a programme that will cover human research, fluid physics, radiation, biology and technology demonstrations. Educational activites are also scheduled during this six month mission. His mission is called MagISStra, combining the Latin word ‘magistra’, a female teacher, with the acronym of the International Space Station. This Latin flavour not only brings in Italian culture as an ingredient of the European outlook, but also echoes the humanistic value of the mission. More background information can be found on: http://www.esa.int/magisstra

More information can be found on the ESA’s Magisstra Website. Nespoli was on board the ISS when our reporter @darrenmccarra caught this image of the ISS over Ireland in early March 2011.