Check out the new LEGO® Beer Bot powered by BuWizz 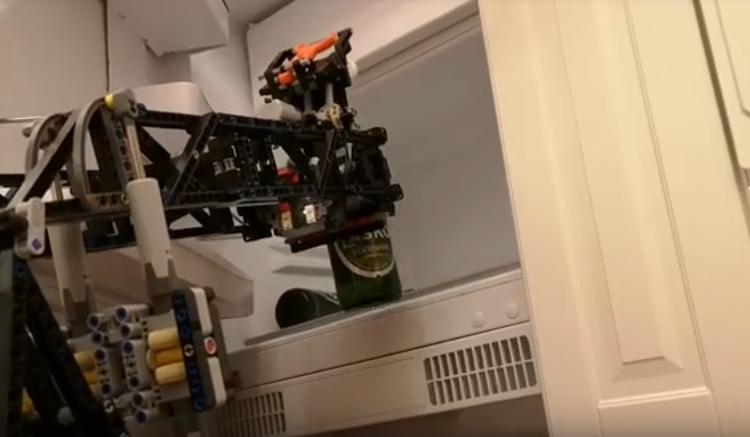 LEGO® bricks have come a long way since Ole Kirk Kristiansen first launched the company named as an abbreviation of the two Danish words “leg godt,” meaning “play well,” in the 1930s.

In the spirit of playing well, BuWizz has released a video of its new Beer Bot, built out of LEGO® bricks and powered by its high performance LEGO®-compatible remote control system and battery.

Designed for the dedicated sports enthusiast that doesn’t want to miss the game on TV or the lazy couch potato, the Beer Bot delivers your beverage of choice without you having to get up.

The Beer Bot is a mobile contraption made of LEGO® bricks, with extension crane, mechanical claw, and bottle opener that comes to every man’s rescue — fetching a cold brew from the refrigerator, opening it, and pouring it into a glass to be served.

The video looks promising, but for the beer connoisseurs out there, you may notice that Beer Bot in the video does not pour at the suggested 45 degree angle, which could cause excess foaming at the head; however, the built-in bottle opener is an especially appeasing touch.

Despite the battery’s small size, it enables precise steering, huge power and speed never seen before, according to the company, which boasts that it is “the most powerful remote control for LEGO®.”

In fact, last summer at the BuWizz company picnic a challenge was set to see if the device was strong enough to tow a two-ton car from a standstill.

With a single BuWizz the team successfully pulled a Porsche Macan.

To give an idea of how BuWizz shapes up compared to LEGO® PF and Sbrick, check out the stats below.

BuWizz is the high-performance controller for LEGO® Power functions. It is compatible with all LEGO® Power functions, as well as OLD elements like RC-Buggy motors 5292 and old 4,5 V train motors (in slow mode). It offers incredible power and delivers voltage up to 11,8 V.