Looking ahead at the release of Sony’s Cyber-shot DSC-HX10V in April we play around with its little brother, the DSC-HX9V, to see what we can expect from the company’s range of expanding prosumer point-and-shoot cameras. 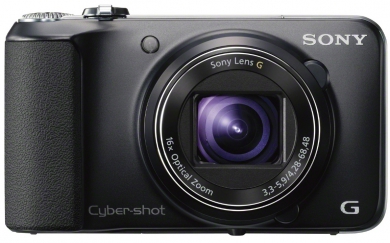 The Sony Cyber-shot DSC-HX9V and DSC-HX10V belong to the company’s range of high performance compact cameras. These offer the simplicity of the regular-point and shoot devices with additional features found on DSLRs (full manual mode) as well as some of Sony’s own magic (3D photos).

As part of Sony’s high-end prosumer range you get pretty much what you would expect from a Sony offering;

Both cameras come with non-detachable Sony Lens Gs, which is nice but we do miss the Carl Zeiss Vario-Tessar Lenses Cyber-shots used to come with.

The HX9V weighs in at a pleasingly hefty 245g (8.6oz.). The metal-finish on the front looks suitably impressive and along with that massive screen is a sturdy device which is easy to hold thanks to some strategically placed rubber grips. One thing we would love to change on the 10V would be the placement of the flash. On both the 9V and 10V the flash is placed on the camera’s top left corner, exactly where your left hand usually is when taking a shot. When the camera’s auto flash kicks in the flash emerges from the camera disturbing your hold, not to mention the shot.

To understand what users would like to see in the DSC-HX10V and beyond we tested the DSC-HX9V with a novice user and an accomplished photographer.

Operating System
The camera’s operating system benefits from the large, 7.5 cm screen; both our novice and expert user had no issues navigating the various settings. They did, however, complain about one feature in particular – the info screen that appears when changing between camera functions.

Moving between each of the settings on the functions’ dial threw up an info screen on the camera for a second that explained the particular setting to the user. Even our novice user, who usually switched between auto and video mode, found this feature frustrating. Now, it can be turned off in the settings but you have to do a bit of digging.

In the wild
With our testers we conducted two rounds of testing, one indoors, and one outdoors.

Indoor shooting was quick, and thanks to the speed of the auto-focus, rarely blurry. In fact it was, perhaps, too quick – our novice recommended turning on the shutter sound effect as she was sometimes unsure when the camera actually took a shot (when she had the lens pointed towards her at arm’s length).

During the indoor shoot both testers were concerned that the images, taken under incandescent lights displayed with an orange tint. But when viewed on a PC these was not apparent.

During both photo shoots testers complimented the camera’s lightening fast auto-focus. On more than one occasion during the outdoors shoot our novice was able to turn the camera on, take it to full 16X zoom, and shoot a correctly focused photograph of a flock of birds in flight from more than 300/400 meters away.

Our expert photographer was impressed by the camera’s manual mode. We have to say that both he and we were dubious about the usability of a full manual mode on such a small camera. But we were quite impressed with the quality of the images it produced.

When using manual mode the camera’s screen gave and impressively accurate rendering of the final prior to taking the shot. With the DSC-HX10V we’d like to see some improvements to the usability of the manual mode to allow users to change between aperture, iso, and shutter speed faster.

With the 10V we’d also like to see improvements to the panoramic setting. This, perhaps even more than the 3D – which has limited uses at the moment, is one of the standout features of the camera but our shots have shown that the function is only truly useful in extremely well lit environments. That said, it was fun to use and added a nice dimension to our outdoor shots.

There were compliments all round for the camera’s HD movie mode; especially when our novice discovered that she could record video using the rec button on the back of the camera, and didn’t have to use the function dial.

The GPS was surprisingly accurate, placing us within three meters of our actual location (as you can see we were far from civilisation) for each outdoor shot. As for 3D shots, this is an nice feature but given its limited usability and the length of time it takes to process a shot we didn’t use it much. But faster processing on the HX10V would certainly change this.

Overall
The H Series cameras are impressive devices, which bridge the gap between fun cameras, ideally suited for a night out, and a light and powerful point-and-shoot that won’t frustrate experts. Having tested the DSC-HX9Vwe’d like to see some minor tweaks to the OS but are looking forward to the release of the DSC-HX10V.