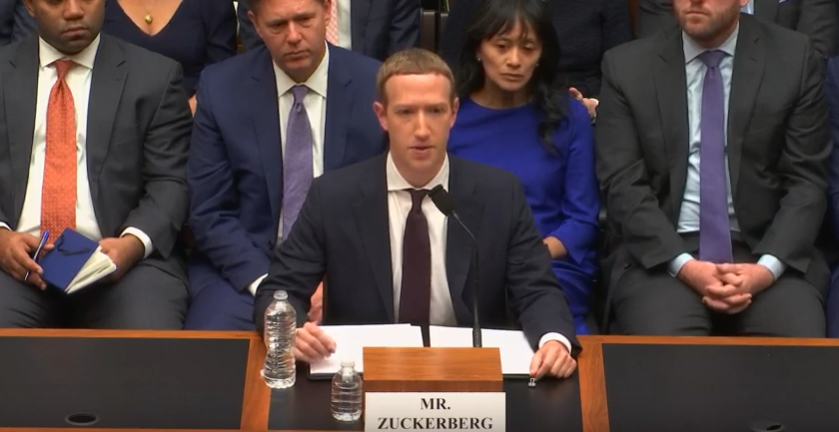 Mark Zuckerberg is appearing before the House Financial Services Committee where Chairwoman Maxine Waters grills him over Libra, political ads, and fact checking.

In Waters’ opening statement, she didn’t hold back on telling the Facebook CEO what she thought of his company’s practices.

“Perhaps you believe you’re above the law, and it appears that you are aggressively increasing the size of your company and are willing to step on or over anyone, including your competitors, women, people of color, your own users and even our democracy to get what you want,” said Waters in her opening statement today.

For his part, Zuckerberg used his opening statement to declare all the good he thinks the Libra cryptocurrency will do for America’s financial leadership.

He sounded very confident in his wording that Libra will indeed be launched.

“The financial industry is stagnant,” he said, adding, “Libra can help. The idea behind Libra is that sending money should be as easy and secure as sending a message. Libra will be a global payments system fully backed by a reserve of cash and highly liquid assets.”

“Facebook is about putting power in people’s hands… Giving people control of their money is important, too. A simple, secure and stable way to transfer money is empowering. Over the long term, this means that more people transact on our platforms — that’ll be good for our business.”

While Zuckerberg sounds confident that Libra will launch, he asserted, “I want to be clear, Facebook will not be a part of launching the Libra payment system anywhere in the world, even outside the US, until the US regulators approve.”

“Facebook changes the rules when it can benefit itself”

“Facebook changes the rules when it can benefit itself. Last year Facebook banned all cryptocurrency ads on its platform because, and I quote, ‘they are frequently associated with misleading or deceptive promotional practices,'” she said.

“Seems fair. Then earlier this year Facebook rolled back the cryptocurrency ad ban, bought a blockchain company, and announced its own cryptocurrency.

“How did cryptocurrency go from being misleading and deceptive last year and then becomes the means for financial inclusion this year? It seems to me that you shifted your stance because you realized you can use your size and your users’ data to dominate the cryptocurrency market. You change your policy when it benefits you.”

When pressed about fact checking political ads and ensuring that no Russians or Iranians would be meddling in US elections, Zuckerberg, for his part, didn’t see why there was a controversy surrounding political ads.

Zuckerberg: Political ads, look, from a business perspective the very small percent of our business that is made up of political ads does not come anywhere close to justifying the controversy that this incurs for our company.”

Waters: You plan on doing no fact checking for political ads?

Zuckerberg: Chairwoman, our policy is that we do not fact check politicians’ speech, and the reason for that is that we believe that in a democracy it is important that people can see for themselves what politicians are saying.”

Waters: Do you fact check on any ads at all?

Waters: Describe what you fact check on.

Zuckerberg: Facebook itself actually does not fact check… We work with an independent set of fact checkers who…

Waters: Somebody fact checks on ads. You contract with someone to do that. Is that right?

The livestream of the hearing began at 10AM EST and was still ongoing when this article was published.