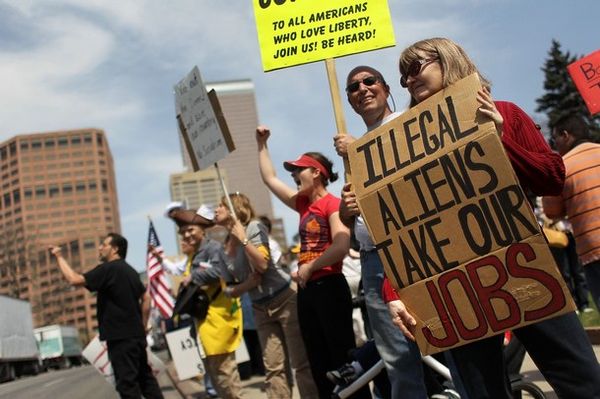 Ignorant of the fact that the top 1% of Americans control 43% of the nation’s wealth, the uninformed populous still believes that illegal immigrants are the cause of unemployment.

The Pollfish survey took answers from 757 Americans, of which 74% were in full time employment. Of those working full time, 53% said that illegal immigration was a problem for the US job market. Among the 10% of respondents who were looking for work, that percentage rose to 56%.

According to the survey, 54% of Americans also blame the current government for the situation with jobs across the country.

The recent Pollfish survey is consistent with last year’s Rasmussen Poll, which revealed that the same 51% of Americans believed illegal immigrants were to blame for unemployment in the US.

The truth of the matter is that “illegal immigrants actually raise wages for documented/native workers,” according to the April 2015 symposium on the effects of illegal immigrants in the Southern Economic Journal as reported by Forbes.

Additionally, the Brookings Institution concluded that “on average, immigrant workers increase the opportunities and incomes of Americans,” according to the International Business Times.

Unemployment in the US can certainly be blamed on minorities — just not in the way you would think. The top 5% of the population controls 72% of the wealth, so that would definitely make a minority monopoly on income and jobs.

Blaming illegal immigrants for unemployment is like blaming Iraq for 9/11 or saying that if you don’t support the troops, you’re an unpatriotic socialist who doesn’t believe in freedom, or that Kanye West represents the best of American music — it’s convenient, but doesn’t have any basis in reality.

It’s like the popular “joke” goes: An immigrant, a worker and a banker are sitting at the table with 10 cookies. The banker takes 9 and then tells the worker “watch out, the immigrant is going to steal your cookie.”

While the rest of the population struggles to find a steady career with a living wage, the powers that be have them divided and conquered over superficial, petty, and xenophobic ideologies.

It would be easy and lazy journalism to start spewing US Labor statistics about unemployment rates over fiscal years based on the GDP, stock markets, and other economic trends, but none of that will get to what’s at the heart of it all, and to put it quite simply, it can be all traced to GREED.

Greed is the biggest cause of unemployment in the United States, according to the International Journal of Humanities and Social Science (IJHSS).

“The global financial crisis of 2008 was largely responsible for widespread unemployment and underemployment of skilled and unskilled workers around the world,” reported Dr. Jeevan D’Souza in an article for the IJHSS called “Greed: Crises, Causes, and Solutions.”

Dr. D’Souza went on to state, “Increasing economic inequality, severe unemployment, the financial crises of 2007-08 and the global economic dominance of large corporations has led to profound political and social instability, eventually leading to large scale protests and uprisings like the Occupy movement.”

“They took our jobs!”

The next time you hear that illegal immigrants are stealing jobs, what you are hearing is spoon-fed BS from the wealthy few who are in power trying to maintain the status quo by scaring the hell out of you, so you never question who’s really pulling the strings.

Their goal is to keep the population angry, distracted, and powerless, so people will never question the source of income inequality, unemployment, and poverty.

We have the resources now to feed, house, clothe, and provide education to every single person on the planet, yet millions are suffering without worldwide.

Are we still going to blame illegal immigrants for our woes, or will we finally take notice that we’re being screwed by unnamed parties who operate behind closed doors and until now, have answered to no one?