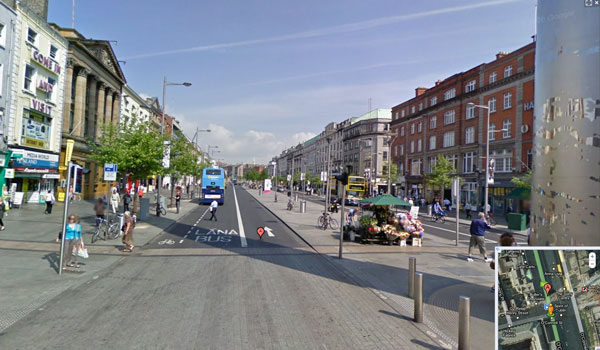 Update: Street view is now live in Ireland. Read our How to use Street View in Ireland before everyone else article to see it first.

As speculated in a previous post, Google officially announced the launch of Street View in Ireland today. A total of 80,000km of panoramic imagery of Irish streets and roads will be made available on Google Maps from tomorrow night, including the cities of Dublin, Cork, Limerick, Galway, and Waterford.

Minister for Tourism, Culture and Sport Mary Hanafin was present at the launch at Google’s Dublin headquarters in Barrow Street today. Speaking at the event she said that Street View “is an example of a practical innovation which makes life easier for people using the internet to locate and research Ireland’s cities, towns and streets”.

Hanafin was aware of the beneficial implications that Google Maps and Street View would make to the Tourism Industry in Ireland: “Street View will showcase the real beauty of Ireland’s towns and countryside to millions of internet users around the world, and has the potential to deliver a welcome boost to visitor numbers to Ireland.”

The service has previously been meet by controversy in many countries, including Germany, Switzerland, and Greece over privacy concerns. John Herlihy, head of Google in Ireland, hastened to calm any concerns over this new service: “Our technology is very effective though it may occasionally miss a face or number plate here and there. If users spot something our technology has missed just press ‘report a problem’ and we’ll get it fixed quickly.”

If you find any interesting imagery be sure to share it with us!