The attacks in Paris on November 13 have sent a shock-wave throughout the world, including a maelstrom of reactions all over social media. While many have changed their profile pictures to include the French flag, Latin American countries have had very mixed attitudes to the recent frenzy of nationalism, including solidarity and indifference.

Latin American sentiment towards the attacks in Paris have mostly been redirected towards the status quo of global terrorism at large, rather than solely on the French capital.

Countries like Mexico, Colombia, and the Dominican Republic tend to have a more broadened perspective of the global war on terror, rather than a visceral, gut reaction to seeing terrorism being wreaked upon Europe.

The Latin message is largely one of peace. There are many Latin nations that have their own histories of war, most, if not all, have been influenced by the west. It is no doubt that Latin America would remain skeptical to the mainstream media, and the general reaction has been to provoke peace worldwide.

The following have been social media reactions from different Latin countries regarding the attacks in Paris on Friday the Thirteenth. These are from individuals and groups that are not affiliated with governments, and they do not officially reflect their respective countries as a whole, but rather they are more of a look into the attitudes being expressed via social media verticals.

In Cuba, @idaniacubana has taken to its 2.3K followers on Twitter to declare that there will be no prayers for Paris from Cuba because there have been no prayers for Syria, Palestine, nor Iraq.

Meanwhile Facebook posts from the Dominican Republic are viewing the attacks not as an isolated incident, but as an overall developing global theme that goes beyond the Parisian melee.

With over 3.75 million likes, Facebook user “filosoraptor” from Mexico called upon all Latinos to denounce terrorism and stand in solidarity with France.

What are your thoughts on Latin America’s reaction to the attacks in Paris? Do you agree with our assessment? Let us know in the comments. 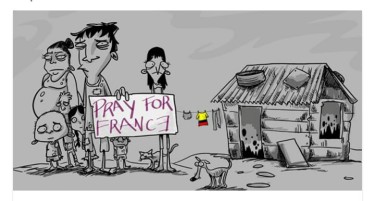