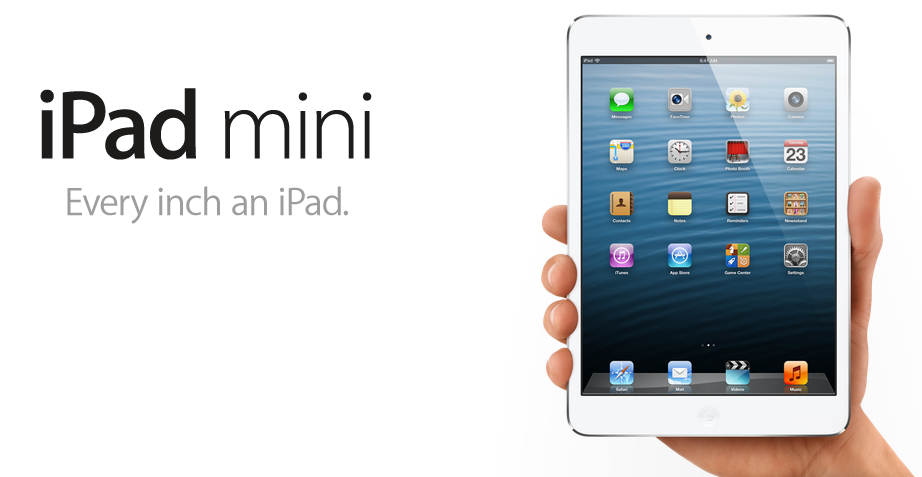 Ah, the iPad Mini – it’s been an open secret in the tech industry for months and today we finally got to see the specs.  And it looks pretty good; a properly powered Apple device but where will it fit in the market?

Price
Whoa, is the iPad Mini expensive. Coming in at $329 for the 16GB model it’s only $70 less expensive than a full sized iPad.  Its Google competitor, the Nexus 7, costs $249 for the same memory spec.  Now, before you go commenting that this isn’t a direct comparison, it’s not meant to be. If someone is a Google or Apple fanboi they’ll opt for the 7” tablet offered by their lovemark.  But for non techies/non fanbois price is a significant factor.  There’s still a recession on and both Google and Apple are respected, household, names so price will be a deciding factor.  Take Amazon, for example; Amazon, the world’s largest online retailer, reports that its $200 7 inch Kindle Fire HD is the site’s best selling product – a good price with a strong brand sells every time.

Weight/Dimensions
The look of the device matters, and it matters more in the eyes on Joe Public than it does for fanbois.  Apple has worked hard to build its reputation as a maker of sleek, sexy devices (just ask Samsung) and this reputation is something that Google’s Nexus range has not been able to mimic yet.  Metal and glass make Apple’s iPad range feel like a serious pieces of kit… the Nexus 7’s plastic front and rubberised back make it physically feel like a cheaper device.

And that’s the difference; Apple’s build quality is outstanding and that, perhaps more than the availability of apps or the actual price, could be the main draw for consumers – if you’re going to spend over $200 on a 7” tablet why not go for the one which feels more expensive?

But here’s the thing – if you’re going to get a device that looks like an iPad and operates like an iPad, would you rather just get an iPad rather than an iPad Mini?

3G
Google is rumoured to be considering a 3G Nexus but with its release it will be lagging behind the iPad Mini which, on November 12, will be available in 3G flavor. But at $459 for the cheapest 3G model, plus additional costs, will there really be many takers? Wouldn’t most users just opt for an iPhone anyway?

Camera(s)
The most persistent criticism of the Nexus 7 has been the dismal 1.2 MP front-facing camera.  The iPad Mini comes with 1.2MP front facing camera which can record 720p HD video (you can hack your Nexus 7 to do this too) as well as a rear 5MP camera.

Availability
The iPad Mini will be released on November 12 and while the Nexus 7 has a four month head start it’s still on limited release in 13 markets (although available in a few more).  Moreover, the full Google Play Store, which is heavily integrated into the Nexus 7, is available in even fewer markets.  On release, the iPad Mini will have access to more content and a greater number of apps but we know from experience in Ireland that the differences between the Play Store and the iTunes Store are not being communicated to consumers.

In Ireland the Nexus 7 is being sold as a media consumption device but it doesn’t have access to the Play Store’s media services.  So even though the iPad Mini will have better access to content this probably won’t be communicated to buyers properly.

Chip
Do non-fanbois care about the processor?

Battery Life
Well, what they claim in battery life never matches up to what you end up getting so a comparison on this front would be pure speculation.

Long and short of it
Where does this leave us?  The iPad Mini appears to be a technically superior device to the Nexus 7, but just look at that price.It’s hard not to see the Nexus 7, or the Kindle Fire, doing extremely well this Christmas when the price is just so attractive.

Both the Nexus 7 and the iPad Mini will do well but the future mini tablet market won’t just be about these two devices.  With the Nexus 7 Google set a standard for other manufacturers to follow.

Google has created the market for 7” Android tablets and other device makers now have a benchmark, both in tech spec and price, to achieve.  They now know the market is viable, all Google has to do is support them by optimising Jelly Bean.

As we’ve seen in the smartphone market, availability rather than technological power, counts for more when it comes to consumer devices.