Get more from The Sociable on Google Currents for Android & iOS

Flipboard has long held the top spot when it comes to magazine-style digital content but it’s facing strong competition from a greater number of sources these days.  Not least of these is Google Currents, which has taken a slice out of Flipboard’s success; thanks, in part, to it coming pre-installed on most new Android devices. 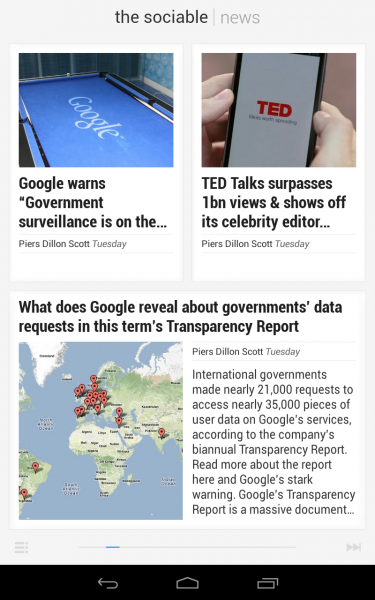 The Sociable on Google Currents

From today you can follow the latest stories from The Sociable on the Google Currents app, on both Apple devices and Google’s own Android powered systems.

You can get started with The Sociable on Google Currents here.

The development of Google Currents addressed a growing need in digital natives – discovery. As social networking became the norm for most technology users the developers encountered a problem; the signal of interesting and relevant content was becoming increasingly difficult to distinguish amongst the noise of the social web.

So, the development focus shifted from encouraging users to sign up and move towards providing them with easier and more convinced ways to discover relevant content.  Facebook addressed this by automatically sorting users’ walls to show the content that it believes they most wanted to see while Twitter created algorithms to show the most popular content for users’ searches.

For search, Google created a complex system of filtering results according to users’ locations, their connections, and their combination of keywords; meaning that more often than not the same search by different users will return different search results.

On smartphones and tablets Google Currents, as with Flipboard and Flud, is the company’s way of addressing this same need.  Apps like Currents, Flipboard and Flud, are designed to allow users to create a collection of content sources that match their interests. Users, in effect, become the editors of their own dynamic digital publication.

Describing itself as “a reading experience not to be missed” Google Currents has been designed to make reading digital content easier on screen and more convenient for users.  The app automatically syncs when it has access to a WiFi or 3G connection meaning you can read the latest stories even if you don’t have access to the web.

You can also add your own RSS feeds as well as subscribe to content from Forbes, The Guardian, TechCrunch, and PBS directly within the app.  And any interesting article you find can quickly be shared to Facebook, Twitter, or Google+.