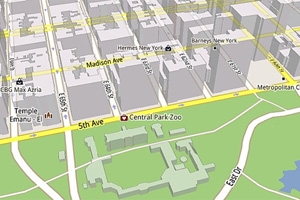 Google have released a demo video [2:28] of Google Maps 5 on the upcoming and much anticipated Nexus S. The Nexus S is the first phone to run Android 2.3 (Gingerbread), which was released at the start of this week.

Google Maps 5 includes many welcome features like offline map support, and the migration of some map rendering to the phone itself instead of on Google’s servers, increasing map performance. The update also includes some new multi-touch gestures and 3D buildings.

The Nexus S will be released on the UK on December 20th, 2010. However, an Irish release date has not yet been published.

Digital disruption and transformation in the cargo transport industry