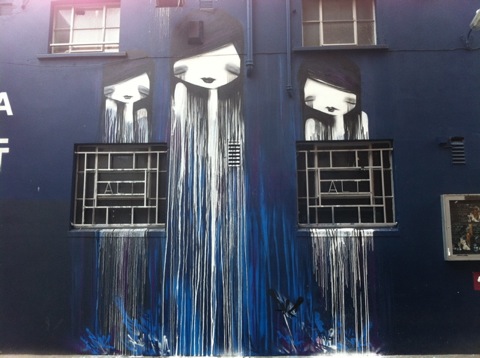 As beta releases go this is a big one,  Mobimage, an Irish startup (@mobimage_me), is using the entire City of Dublin as a canvas for the first release of its Twitter-based image recognition technology, ‘Snap + Tweet’.

The system works by analysing  images of specific artworks tweeted to the Twitter account, @roadworks11.  Each time an image has been tweeted to the account the image recognition technology will then tweet back more information about the piece of artwork; in this instance a link to the Roadworks’ website.

The Roadworks’ website itself, as well as the roll-out has been supported by Arekibo Digital (@arekibo | Facebook)  Fresh from winning the Best Design award at this year’s Irish Internet Association Dot Net Visionary Awards Arekibo’s Managing Director, Martin Casey (@martinjcasey), explains why the company was drawn to mix art and technology in this way;

“We loved the idea and concept of snap + tweet. ArekiboVentures are looking for new ways to use technology to deliver value to people and this idea we believe will become a commonplace over the next year. We were delighted to work with Mobimage to create this innovative campaign and look forward to seeing them grow over the coming months.”

If you want to see it in action, this is how it works.

Speaking to the Sociable earlier this month Mobimages’ founder, Alan Doherty (@alanjgdoherty), said that ‘Snap + Tweet’ has been designed to bridge the gap between art, media and technology, allowing artists and brands in the real world to interact with the public in the digital sphere.

“This is the first large-scale deployment of ‘Snap + Tweet’ worldwide, and Roadworks is a perfect use-case for this new technology. Image recognition is much less intrusive than QR codes and far easier to scan. With image recognition, each artwork is its own QR code.

“Organisations and brands, can now interact with people in a whole new way,” Doherty added.

The platform has been launched as part of the Dublin Contemporary arts festival (@DubCon) which has seen Ireland’s capital host dozens of artists and art forms from across the world in a two month-long city-wide series of exhibitions.

Although Dublin Contemporary comes to an end in November the Roadworks project will remain in operation.