Brain stimulating headgear for treating depression at home is getting smaller 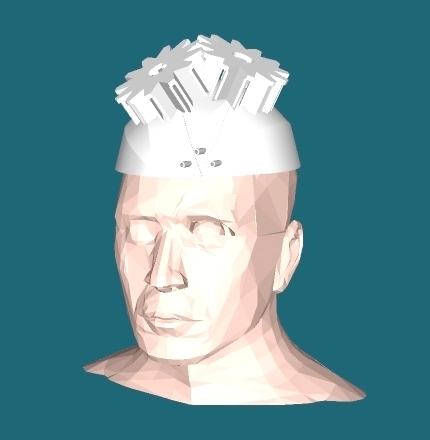 Brain stimulating headgear for treating depression at home is getting smaller and less painful, with fewer headaches reported among those who use it.

Miniature versions of Repetitive Transcranial Magnetic Stimulation (rTMS) are starting to become of interest to outpatients of depression owing to the portability and comfort it offers right at home.

rTMS is a promising neuro-modulatory technique that has been demonstrated to be safe and effective in the treatment of depression.

However, rTMS treatment requires repeated visits to a hospital for several weeks, where the patient is strapped to a head gear attached to a bulky equipment. Problems such as discomfort, headaches, and even fainting spells, have been reported.

Mental health dropout rates are already high, and many outpatients being treated for depression fail to complete their recommended course of treatment.

To ease the treatment through rTMS, it is now moving into homes in a miniaturized version. Does a miniaturized portable version of rTMS mean it’s less effective? Or will its cost-effectiveness and user friendliness make it a better option for depression patients?

The Sociable spoke with Janice Huang, the founder and CEO of NeuroPrex Inc. (NPX), which is making non-invasive bio-electronic devices to treat depression and neurological disorders. Huang was one of the delegates attending the Horasis China Meeting in Las Vegas last month.

“The device has been reinvented to be wearable, to simplify current TMS procedures, and to serve more patients and doctors in a comfortable, affordable, and natural setting”

NPX has come up with a miniaturized rTMS device that is smaller and easier to use, causing fewer headaches and can be used by a patient at home.

Pending FDA approval, Huang says that their intention in having the device small in size was to make it as a homecare device, so that more stable patients of depression can wear the device and use it with the press of a button.

“I found the TMS device was not in popular use by doctors. Yet, it has enormous potential to treat inflammation and relieve pain. I knew from my immunology background that the underlying root cause in many diseases is inflammation,” she says.

While working as a research fellow at the School of Medicine at Stanford, Huang was working on projects to find solutions for the unmet needs in medical society.

“From there, I developed a passion and put my efforts and resources into improving the TMS device a great deal. I want to bring the NPX device to all doctors, and eventually for patients to use at home,” she says.

TMS therapy has been used for a growing number of drug-resistant, hard-to treat depression patients and, Huang informs us, it has been proved effective for prevention of suicidal behavior.

The device generates a strong magnetic field penetration. It can induce the production of eddy currents inside the targeted tissue in the brain and modulate nerve activities at a cellular level.

A miniature rTMS has often been under fire for being less effective, the home devices often even likened to a placebo.

A recent Clinical Psychopharmacology and Neuroscience study has concluded that the antidepressant utility of miniaturized rTMS using lesser stimulation was comparable to that of standard stimulation.

However, the same study also says that “future studies should investigate the efficacy of self-treatment using miniaturized rTMS at home to further determine the clinical applicability of this new treatment modality.”

Read More: Doctors will navigate this passive pill cam like they were playing Xbox

“The device was reinvented to be wearable, to simplify current TMS procedures, and to serve more patients and doctors in a comfortable, affordable, and natural setting,” Huang says.

Currently, a normal-sized TMS technology is expensive, and can be uncomfortable and painful. Huang says treatment can be as expensive as $70,000-$150,000, especially for deep penetration.

“Forty percent of patients develop headache and scalp pain during and after therapy,” she says.

Need for Non-Invasive Electronics in Healthcare

The non-invasive nature of TMS has made it popular with outpatients of depression and neurological disorders.

TMS was approved by the Food and Drug Administration (FDA) to treat drug and/or therapy-resistant depression in 2008, after some 20 years of clinical studies. Its efficacy was much better in comparison to the invasive electroconvulsive or electroshock therapy, which required the patient to be sedated.

Huang says that non- and less invasive medical procedures are becoming popular and widely accepted by patients and doctors.

I was having SUCH a good hair day too. ?#MartyHasTMS#NoStigma#TranscranialMagneticStimulation pic.twitter.com/8wMXxZjWxu

“For treating depression, taking drugs for a long time or deep brain stimulation through surgical procedure to implant a device, are regarded as invasive, since they are retained in the body for a period of time.

“The energy of TMS is only applied to the lesion site in a brain for a duration of 40 minutes per session. It is relatively safe with minimal side effects,” she explains.

Depression and anxiety disorders are the most prevalent of mental healthcare problems in the US workplace, accounting for $1 trillion per year in lost productivity for the global economy, according to the World Health Organization.

Drugs for treating depression often have a slow response and insufficient success rate in the drug resistant population. Also, after long-term use, depression drugs come with side effects, such as suicidal tendencies, strokes, delusions, and heart diseases.

“Right now, the most popular treatment and the golden standard therapy for depression are doctor-prescribed drugs,” says Huang.

So how is the miniature rTMS better?

It has unique electromagnetic coils embedded in a protection layer and a miniaturized power system.

“We use surface-pain-reduction technology to provide a safe and comfortable therapy to ensure that the energy is precisely delivered to the lesion site in the brain, ensuring efficacy and reduced side effects,” she says.

NPX has been awarded a grant by the National Science Foundation’s Small Business Innovation Research (SBIR) of the US government. They also received a grant from the Horizon 2020 of European Commission.

Huang reveals that NPX is planning two editions, one with basic therapy feature, and the other a deluxe edition. This deluxe edition, for use in military and home use service, is being designed to incorporate IoT technologies.

It will provide services such as, telemedicine, physical therapy, meditation education, entertainment for enhancing cognition or relaxation, herbal rehab and diet control, brainwave and physiological measurement, and ambulatory healthcare.

NPX also plans to offer users an app version of the device that can measure brain waves and physiological measurements. To make it a home care device, they also plan to add Artificial Intelligence (AI) to it. In fact, they are planning it to be a robot that chats with patients to lift their spirits.

“Because depression patients often avoid social contact and don’t go out, many people are shy and they don’t want to meet the doctor. Our device will be like a PlayStation for patients, which they can use to relieve stress,” says Huang.

While using a miniaturized rTMS at home to ease symptoms of depression is on the rise, we are yet to determine whether it will become a clinically applicable device.

However, with reduced discomfort and side-effects, it might be a beacon of hope in the face of treatment-resistant depression.