Part IV of our interview series on precision medicine 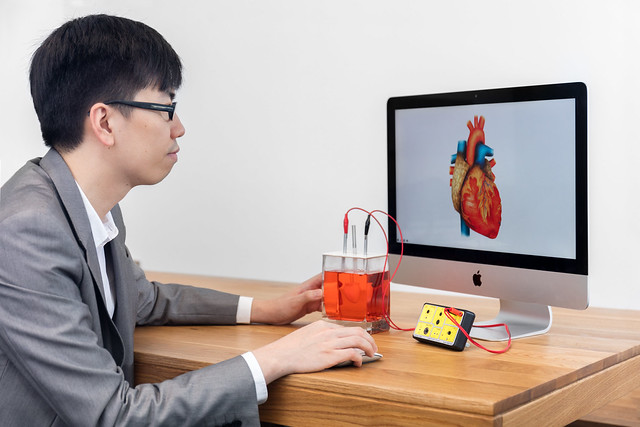 Be sure to check out Part I, Part II, Part III, and Part V of our 5-part interview series on precision medicine!

Imagine a doctor recommends a strong medicine to a patient, a medicine that often causes cardiac problems in patients.

However, instead of testing the drug on the patient, the doctor gets a lab-grown, mini-sized replica of the patient’s heart.

The drugs are administered on the mini heart until the right drug is found. Only then is it administered to the patient.

“Imagine a situation where you take cells from a particular patient, make these little mini hearts for that patient, and test potential therapies in the in vitro system before you subject the patient to those therapies”

Before you start thinking “Chromosome 6,” (a reference to a Robin Cook book) see what Kevin Costa, Co-Founder and Chief Scientific Officer at Novoheart told The Sociable.

Their MyHeart platform’s miniature hearts made from human cells could be bringing in a revolution in precision medicine as well as drug discovery.

“Precision medicine isn’t just human-based, it’s individual based, and you can get increasingly precise,” he says.

With a mini heart pumping away like any regular one, one can start to specialize a little bit more. For example, finding out the specifics of a disease in different ethnic backgrounds, like the Jewish population, African-American, Caucasian, or Asian.

“So you can go from just having a human heart to an Asian, Caucasian, African, or whatever you want. You can also look at differences between male and female. So that’s starting to get a little more precise,” he explains.

So we can really get to the level of precision of an individual.

“You can even make these tissues from an individual patient. Literally, we’ve got hearts in our laboratory that were made from a particular patient’s skin cells,” he gushes.

Novoheart focuses on stem cell and tissue engineering for next-generation drug development and discovery. They are primarily a service company providing screening services based on their human tissue engineering technology, which they call the MyHeart platform.

The MyHeart platform consists of several different cardiac assays of human cardiomyocytes, human heart cells that are derived from human induced pluripotent stem (IPS) cells, which means human stem cells that can be differentiated into any cell type of the body.

The IPS cells are then mixed with the cardiomyocytes to make a 3D Structure and then cast into different types of tissues or layers of cells that Novoheart uses to measure electrophysiology or strips of tissue to measure contractility.

“Rather than subjecting the patient to testing various cocktails of drugs, if we could get some information early on about whether a particular patient is more susceptible to a therapy, we can treat at a very granular, precise level for each patient”

“So it’s kind of like the electrical and mechanical side of how the heart works. We make these little mini hearts that pump like human hearts and give us measurements that clinicians are interested in, for example, cardiac output stroke volume” he says.

Everything that Novoheart does is based on human cells. Tissue engineering has evolved to use human cells instead of rodent, and this was the basis for the original idea for Novoheart.

Drug discovery currently involves a process that starts with investigating a few thousand compounds in the laboratory, from which a couple of hundred that look promising can be tested in an animal model.

“Then you have to sort of take a leap of faith in moving from testing on animals to human patients. That’s the next step in the clinical trial process,” Costa explains.

Costa says for every drug that enters a clinical trial process, 90% of them fail. Maybe, one out of ten that goes back out of several hundred is actually a go, after which clinicians consider candidates and try to get FDA approval.

“It’s a very inefficient and time-consuming process involving a couple of billion US dollars. Typically, to go from initial concept to approval, it can take over a decade,” he says.

The Novoheart team thinks that part of the inefficiency lies in that leap of faith in going from animals to patients.

“The way to help improve that process would be if we could get information in a human based heart system before actually testing on patients.”

Novoheart has found a less risky way in terms of safety concerns for trying things on patients for the first time.

“Also, if a compound doesn’t work, you can reiterate in the laboratory and improve its safety and efficacy before moving on to clinical trials. This could ensure an increase in the success rate of clinical trials from 10% to who knows 50% or more.”

According to Costa, one of the top reasons that drugs fail in the regulatory approval process is because of cardiac side effects, which is a major roadblock. That is a part of the reason Novoheart focuses on cardiac miniatures.

“We focus on cardiac because that’s our expertise. But the drugs that we are testing can be for any body part or disease because they all have to go through at least a cardiac safety assessment,” he says.

“These organoids are designed thinking ahead towards that day when we will be able to have a little heart organoid, a liver organoid and a little brain organoid, all communicating with one another, kind of like a little humanoid”

“If you want to find a drug that’s going to cure diabetes, you want to ensure it isn’t going to give you heart disease in the process. So you can try it on the healthy heart tissue and see if it’s safe. If it causes arrhythmias or hypertrophy, it would be a problem for the patient,” he says.

The other kind of tissue they make is diseased tissue.

“If you’re trying to develop a drug to cure heart disease, you need to have a model of that disease. So Novoheart is actively involved in that as well,” he says.

Will they branch out then to other organoids? How about the liver?

Read more: Machine learning will be able to predict diseases years before onset of symptoms

Costa says Novoheart is thinking about combining different types of organoids together with the technology they’ve developed. Costa paints a little picture of the future,

“These organoids are designed thinking ahead towards that day when we will be able to have a little heart organoid, a liver organoid and a little brain organoid, all communicating with one another, kind of like a little humanoid.”

A Future of Personalized Medicine

Currently, it’s not particularly cost-effective to be able to do this for every single patient. However, Costa says, as the process becomes more streamlined and economical, the future is hopeful.

“Imagine a situation where you take cells from a particular patient, make these little mini hearts for that patient, and test potential therapies in the in vitro system before you subject the patient to those therapies,” he says.

“Precision medicine isn’t just human-based, it’s individual based, and you can get increasingly precise”

This will have a major impact on medicine because, often, a cardiologist has to consider multiple therapies for a patient. In the current way of doing things, they try out and see what works on the patient. If not, they go to a second trial, second drug, and see what works best. If this testing process could instead be done on little organoids, it would be helpful.

“Not just cardiac drugs, many chemotherapies have cardiac side effects. So rather than subjecting the patient to testing various cocktails of drugs, if we could get some information early on about whether a particular patient is more susceptible to a therapy, we can treat at a very granular, precise level for each patient,” he says.