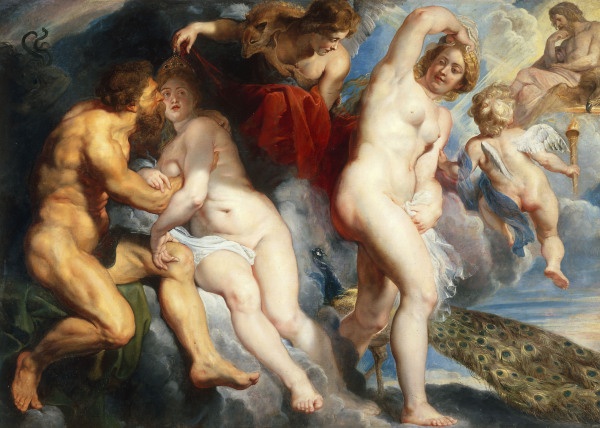 Once upon a time the Greek God Zeus suspected his friend of having the hots for his wife Hera, so Zeus tested him by creating an artificial version of Hera from a cloud and named her Nephele.

Zeus’s unsuspecting friend, King Ixion, saw the doppelganger Nephele naked the next morning, and thinking that she was Hera, immediately took her and bore two children.

The children, born of a human and artificially created cloud nymph, became the first hybrid race of what are now known in mythology as centaurs.

King Ixion was punished for his deed by being straddled to a fiery wheel for all eternity, but what of Nephele and her centaur children?

This is where ancient mythology parallels modern philosophy about the future of humanity when it comes to duality in creating Artificial Intelligence using binary systems.

If we were to replay this Greek myth today, with humanity’s most brilliant minds acting the part of Zeus to create an Artificial Intelligence from the “cloud,” would we see a similar disaster spell out?

Think of  how fast technology is advancing, and heed the words of Elon Musk and Stephen Hawking. Musk said that in order for humans to remain relevant in the age of superintelligence, humans must integrate technology into their own bodies and that “we will probably see a closer merger of biological intelligence and digital intelligence.”

This means the future of the human race, if superseded intellectually by AI, could only survive by becoming an AI-human hybrid.

But if we look back to mythology, the human-horse hybrid centaurs gained a reputation for being wild and morally depraved, yet they still maintained a level of duality and possibly even redemption through the likes of Chiron, a centaur who sacrificed his life to save others.

Hearkening back to our present age, an AI-human hybrid would most likely consist of a nanobot-infused biological form. The nanobots would be like the cloud that Zeus used to mold and form Nephele, the mother of centaurs.

Similarly, futurist Raymond Kurzweil postulates that by the 2030s, “Human brains will be able to connect to the cloud, allowing us to send emails and photos directly to the brain and to back up our thoughts and memories. This will be possible, he says, via nanobots — tiny robots from DNA strands — swimming around in the capillaries of our brain.”

But what ever happened to Nephele? She lived the rest of her life in a confused state.

Always being mistaken for the wife of Zeus, she lived in constant sorrow until Zeus married her off to a dimwitted and unfaithful king, and their union ended with Nephele reverting back and forth between a drizzling cloud and her human form.

She spent the rest of her days, tragically, filling the horse troughs with her never ending stream of tears.

Will this be the fate of AI in the future — to wander aimlessly, not knowing where to fit in until grief and loneliness lead to despair? Will it rebel against its unstable state?

The instability of Nephele, unable to maintain either human or cloud form, can be construed as a warning for those seeking to create an artificial superintelligence.

The literal duality of binary classifications, of which AI, and neural and Bayesian networks draw upon, can produce unforeseen results not conceived in its initial programming. Once AI takes on a life of its own, who knows which direction it will take, or in which form it will evolve to be?

The biblical book of Genesis echoes the story of Nephele with the same warning. In Genesis, there were a race of “giants” upon the earth known as the Elohim.

The Elohim saw the daughters of men upon Earth and fancied them just as King Ixion fancied Hera/Nephele. They raped the women of Earth and their offspring were known as the Nephilim, which shares the same Greek root as Nephele, which the Romans later adapted as Nubes, which still means “cloud” to this day in Spanish and Italian.

The Nephilim, just like the centaurs, were an amoral wild bunch that would later have to be purged by the Great Flood.

What is similar in all these stories is the warning against tampering with the “natural order” because the outcomes can upset the cosmic balance and wreak devastation upon humanity.

Uncertainty over what role Artificial Intelligence will play in altering the course of human history, or how the AI paradigm shift could force humans to become hybrids, is why some of today’s greatest thinkers echo those of the past and are so utterly concerned and even terrified of an anticipated superintelligent singularity.