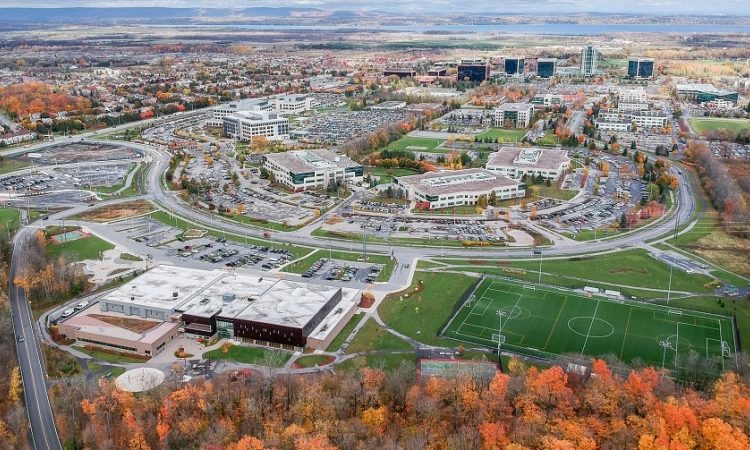 Kanata North has been steadily evolving into Ottawa’s leading hub for innovation, cutting-edge tech businesses, and knowledge-based industries, having created more than 33,000 skilled jobs and contributing over $13 billion to Canada’s GDP every year.

However, like any other globally recognized economic powerhouse, its continued success is not a forgone conclusion and it needs to address the existing challenges and identify new opportunities to develop a highly resilient ecosystem that can withstand the test of time.

This needs urgent attention, especially as the coronavirus pandemic has brought down the walls of the confined business space and the rise of remote work has intensified global competition for top talent that serve as the backbone of any innovation economy.

The main priority for the Kanata North Business Association (KNBA), the park’s economic development arm, is to fill the open job roles in the country’s largest technology park that is home to over 540 Canadian and international companies operating in telecommunications, 5G, cyber security and other technology verticals. And do so with newly increased global competition.

What’s more, productivity of the richly diverse pool of Kanata North workers is on average four times greater than the average Canadian worker. So another crucial step is to introduce more incentives to retain much-sought-after professionals that can help build a prosperous future for Canada’s economy post-COVID.

KNBA strongly believes in the potential of the fast-thriving suburb for three key reasons:

KNBA also believes in the power of partnership. As a burgeoning innovation hub in the heart of Canada’s capital, we recognize that our success is in part connected to the strength of our partnerships. Bringing together the support and expertise of Canada’s top leaders in innovation and technology will be integral to the bright future we envision for Kanata North.

That is why Salesforce and KNBA—via Hub350—have partnered: to accelerate and drive the growth and innovation of Kanata North and its members.

Salesforce shares many of the same values that KNBA lives every day. They are a company that believes that today’s global challenges require businesses to digitally transform while leveraging integrated customer data to become more responsive, resilient, and efficient.  For companies in every industry and region, including Kanata, connecting to customers through digital channels is more important than it’s ever been before.

Salesforce is committed to giving back to local communities, closing the equality gap, and helping businesses grow. For this reason, their partnership with KNBA will help strengthen the already large and growing pool of tech talent in Canada and will help shape a more tech-driven future in Kanata North.

All the right players

Every business hub needs strong supporters to succeed, and Kanata North is fortunate enough to have all the right players in the right environment across key sectors of the economy, who can create a stronger link between academic discipline, corporate technology, and startups.

The area hosts some of the country’s telecommunications stalwarts like Mitel and BlackBerry and international conglomerates such as Nokia, Cisco, and Ericsson, all of whom offer stable employment for a segment of the population. This is significant as telecommunications, wireless, and photonics is the largest sub-sector in Kanata.

The park being home to L-SPARK, the country’s largest software-as-a-service (SaaS) accelerator, is another great enabler since software is the second-largest sub-sector in the area by employment and by revenue.

A host of promising startups residing in the technology park are also making a great contribution to the growth of the high-tech industry and job creation in the area, particularly those who are in the scale-up stage. These small and medium enterprises are a major engine of economic growth as they account for 99% of businesses in Canada.

Local and national authorities as well as private stakeholders and investors have also had a huge role in transforming Kanata North into a leader in 5G, connectivity, artificial intelligence, cyber security, the Internet-of-Things (IoT), and autonomous transport.  For example, Ottawa was the first Canadian city to launch testing of an on-street autonomous vehicle communicating with live city infrastructure — and one of the first in  North America — and the city’s connected and autonomous vehicles public test track is located in the park.

The academic community is another pillar of the flourishing tech ecosystem in Kanata North, with prestigious educational institutions such as the University of Ottawa and Carleton University, having a physical presence in the park and nurturing the next generation of professionals.

As these institutions enjoy an open communications channel with decision-makers in Kanata North, they are in a unique position to bring a well-educated and tech-oriented workforce to the doorstep of member companies to fuel growth for the companies that are based in Canada’s largest technology park.

The golden chance to upskill and reskill

By 2025, automation and a new division of labor between humans and machines is forecast to disrupt 85 million jobs globally in businesses across a broad spectrum of industries and economies while creating 97 million new jobs.

And it is estimated that more than 100 million workers will need to find a different occupation by 2030.

So the most competitive businesses in the coming years will be those that prioritize reskilling and upskilling their current employees. Salesforce, for example, is committed to reskilling Canadians through programs offered on its free online learning platform called Trailhead.

Easy access to programs like this, and educational institutions in Kanata North along with a myriad of opportunities in startups and different kinds of organizations can facilitate the reskilling and upskilling of tech professionals within Canada’s largest tech park.

In parallel with efforts to narrow down the gender gap in tech, Discover Technata—the country’s largest aggregated tech job board developed by KNBA—is facilitating the recruitment process for companies in the technology park whose arms are open to tech specialists from different parts of the globe.

The future of tech in Kanata North is more promising than it has ever been, especially with new partners like Salesforce, and as the Ottawa government has designated the technology park as a special economic district and has committed to prioritizing it in its long-term planning.

But there is an immediate need to tackle the current headwinds to build a better tomorrow.

Some of these challenges are expected to be addressed through the Hub350 project, which is taking shape in the heart of the park as a physical, state-of-the-art global center.

Hub350 will become the crown jewel of Kanata North, where corporate innovation partners, academia, tech professionals, and researchers can explore opportunities while living, working, playing, and learning alongside each other. It will co-locate 40 corporate partners, post-secondary institutions, investors, banks, and government funders.

The mixed-use center will enable a deeper integration of local, national, and international post-secondary institutions, providing a space to soft land in the technology park and accelerating member companies’ access to people and skills.

It will also contribute enormously to the inclusive vision embraced by KNBA through fostering collaboration among existing members and enhancing cluster development.

The prospects are truly bright for the Hub350 project given that the soon-to-open technology centre has already received national media recognition in the Financial Post, Global News Canada, and IT World Canada.

Disclosure: This article is brought to you by a client of an Espacio portfolio company.