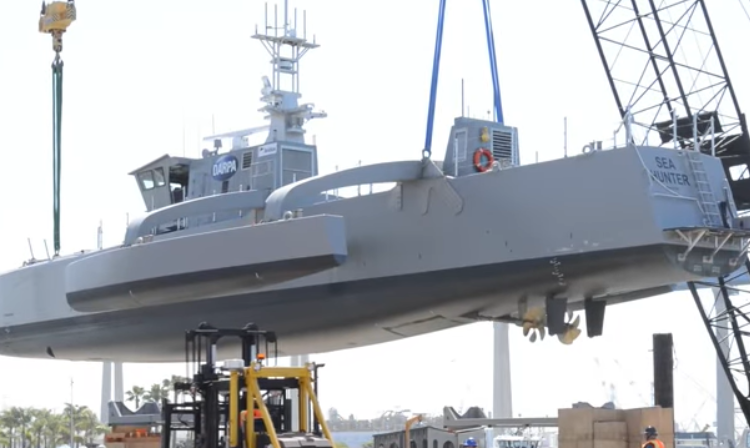 While the US Navy continues to push for unmanned fleets, DARPA moves ahead with the No Manning Required, Ship (NOMARS) program, following the successful development of the autonomous Sea Hunter vessel in 2016.

The Navy has been looking to beef-up its unmanned fleet for some time now with plans for “a fleet of 10 corvette-sized large unmanned surface vessels (LUSV) within the next five years to assist its main manned fleet by completing ‘dull, dirty, or dangerous’ missions.”

“NOMARS will focus on exploring novel approaches to the design of the seaframe (the ship without mission systems) while accommodating representative payload size, weight, and power”

Last month the Defense Advanced Research Projects Agency (DARPA) set a proposers day for January 13 to detail the NOMARS program ahead of a broad agency announcement.

NOMARS “seeks to design a ship that can operate autonomously for long durations at sea, enabling a clean-sheet ship design process that eliminates design considerations associated with crew,” according to the proposers day brief.

Like clockwork, the announcement came just one month before Defense News reported that, “The head of the US Navy’s Fleet Forces Command has ordered the service’s surface force to develop a concept of operations for both the large and medium unmanned surface vessels in development.”

What’s unique about developing an unmanned naval ship is that the presence of humans is taken completely out of the equation, so everything needs to be adapted with that in mind — there’ll be no one there to make repairs, the use of space is completely redesigned without the need for crew safety or comfort, and the vessels will have to be reliable and survivable on their own upon the hostile seas.

Exploring these uncharted waters takes innovation, and DARPA is looking at some interesting specifications for the NOMARS program with two research tracks.

“By removing the human element from all ship design considerations, the program intends to demonstrate significant advantages, to include size, cost, at-sea reliability, survivability to sea-state, and survivability to adversary actions such as stealth considerations and resistance to tampering,” the NOMARS program description reads.

On December 20, 2019, Breaking Defense reported that the White House Office of Management and Budget (OMB) had “instructed the Navy to come up with a plan ‘to achieve a 355-ship combined fleet, including manned and unmanned ships, by 2030.’

“To help the service boost the size of the fleet, OMB also ordered the Pentagon to ‘submit a legislative proposal to redefine a battleforce ship to include unmanned ships, complete with clearly defined capability and performance thresholds to define a ship’s inclusion in the overall battleforce ship count.'”

The legislative proposal would ultimately have to be approved by Congress.

The Pentagon’s 2020 Defense Budget Overview reported that $3.7 million was budgeted to invest in Unmanned/Autonomous technology that “Enhances freedom of maneuver and lethality in contested environments through development of offensive-armed Unmanned Surface Vessel, Unmanned Undersea Vehicle, and Autonomous Logistics Platforms.”

The Pentagon’s investment into Unmanned Surface Vessels, paired with increased investment in long-range maritime munitions, “represents a paradigm shift towards a more balanced, distributed, lethal, survivable, and cost-imposing naval force that will better exploit adversary weaknesses and project power into contested environments,” according to the report.

Breaking Defense added, “The 2020 defense budget provides $407 million for the Navy to buy large unmanned surface vessels, but does not allow the service to arm them with missile-carrying vertical launch systems just yet.”

Nowhere in the NOMARS program description does DARPA say what the unmanned vessels will be used for, which could be anything from surveillance and reconnaissance to possibly even combat.

As it stands, NOMARS will focus on exploring novel approaches to the design of the seaframe (the ship without mission systems) while accommodating representative payload size, weight, and power.

Perhaps some day this technology could also be used for scientific study and academic exploration as many technologies researched and developed at DARPA later become publicly available after first going through military and intelligence use.

An April 2016 christening ceremony marked the vessel’s formal transition from a DARPA-led design and construction project to a new stage of open-water testing conducted jointly with ONR.