What ‘overwhelmingly classified’ technologies could the Space Force disclose? 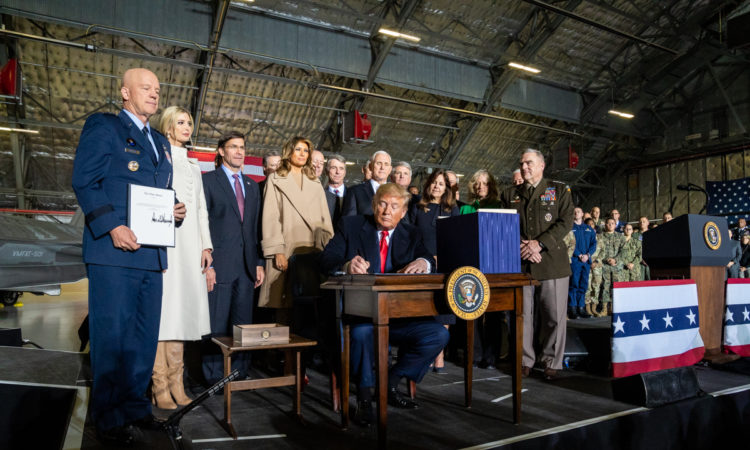 Will declassifying black space programs shed light on the development of advanced technologies that could rally public support for the Space Force?

Just before the new year President Trump signed the NDAA 2020, establishing the Space Force, but one of the many challenges America’s sixth military branch has faced is centered around disclosing “overwhelmingly classified” material.

While the Pentagon already spends billions in black budget projects, the newly-formed Space Force will look to declassify large swaths of information to get the American people excited about its potential while discouraging adversaries like China and Russia.

But could declassifying black space programs actually reveal the development of advanced technologies through a new means of disclosure?

At the Reagan National Defense Forum last month Air Force Secretary Barbara Barrett expressed her concern that when it came to military space programs, there was “much more classified than what needs to be” while Congressman Mike Rogers said these programs were “overwhelmingly classified.”

If declassifying black space portfolios could garner public support for the Space Force, does this mean that new advanced technologies could be revealed, or is declassification simply meant to show how vulnerable the US is in space compared to China and Russia?

What would be the public’s reaction to full disclosure of advanced technologies, or is this line of questioning just a pipe dream?

Happy New Year Everyone. 2020 is going to be amazing with many official disclosures. Space Force will result in many classified technologies being released that will revolutionize air & space travel. Civilians will be able to travel around Earth in minutes & also into deep space!

Barrett said, “Declassifying some of what is currently held in secure vaults would be a good idea,” but she didn’t mention specifically what type of information could be declassified.

Declassifying could simply mean declassifying information about the programs’ logistical matters, but even if it involved declassifying information pertaining to something like mining celestial bodies for critical materials that power all of our technology, that would represent a huge shift in support of the Space Force because there would mean an abundance of materials for making smartphones without having to rely on child labor in the Congo or dealing with China.

The Defense Intelligence Agency (DIA) has already released a report on the Challenges to Security in Space, meaning that space threats have already been publicly disclosed, so what more can we learn from declassifying?

“We know that UFOs exist. This is no longer an issue. The issue is why are they here?” — Christopher Mellon, former Deputy Assistant Secretary of Defense for Intelligence

In the divided UFO community there is much speculation that the new Space Force will lead to the disclosure of highly advanced technologies that could change everything from how we travel on and off the planet, as well as military capabilities that would look like something from science fiction movies.

To get a taste of what I’m getting at remember that last year the DIA declassified that it spent $22 million between 2007 and 2012 to research such technologies as:

Research is one thing. Achieving operable results is another.

The DIA may or may not have been able to achieve some of these technologies, but what’s important is that the US government believes enough in these technologies to invest at least $22 million — that we know of.

“Where are they coming from and what is the technology behind these devices that we are observing?”

What gives gravity to the situation is that the Navy has already confirmed the existence of UFOs, which it calls Unidentified Aerial Phenomenon (UAP), and declassified video footage from fighter pilots shows UAP making maneuvers that appear to defy the laws of physics.

It’s been proven that advanced, aerial and space technology already exists, which many in the UFO community have been screaming for decades, but is only slowly being officially acknowledged.

Are those who control this technology friend or foe? Can governments keep secrets?

Some of the upper echelons of the defense and intelligence communities haven’t a clue where the advanced technology comes from.

For example, “Christopher Mellon, former Deputy Assistant Secretary of Defense for Intelligence, has said that the US knew UFOs existed. ‘We know that UFOs exist. This is no longer an issue,’ he said. ‘The issue is why are they here? Where are they coming from and what is the technology behind these devices that we are observing?'” Fox News reported last year.

“Space is critical to our way of life, as well as our military. And we need people to understand that”

To those skeptical of the Space Force — those who don’t see its validity and believe it to be a huge waste of taxpayer dollars — Deputy Assistant Secretary of Defense Stephen Kitay said during a briefing last month, “One of the first aspects is educating Americans so they understand the role of space for our country.

“Space is critical to our way of life, as well as our military. And we need people to understand that. And we’ve gotten to the point where, as a nation, space is so important to us that we need an armed force, a military service, that is designed to protect and defend our interests in this critical domain and continue to provide the critical capabilities to our country for space.”

From a defense perspective the need for a Space Force is great.

“China and Russia, in particular, are developing a variety of means to exploit perceived US reliance on space-based systems and challenge the US position in space. Iran and North Korea also have demonstrated some counterspace capabilities that could pose a threat to militaries using space-based services,” according to the DIA Space Threat report from last year.

The US government sees China as a threat in many areas, but in space it is particularly concerned that China will use space for:

Would declassifying the “overwhelmingly classified” space programs shed more light on the urgency of the Space Force’s mission, or is there something more to it?

While the need to protect US interests in space for defense purposes is considered a priority, the Space Force could also lead to advances that could ultimately benefit the lives of private citizens if the technology were to exist and be declassified.

From a civilian perspective, the creation of the Space Force could lead to the declassification of advanced technologies that could forever change our way of traveling and beyond! Or maybe it won’t. Who knows? Classified is classified.

As is often the case, technology can be applied across a wide range of industries, and what revolutionizes the air and space industry could one day lead to breakthroughs in the medical field (i.e. robotics, prosthesis, brain-computer interfaces, etc.) or it may even present new understandings of our place in the universe while gaining a deeper perspective about the role of consciousness in our lives.

On the other end of the spectrum, some in the UFO and disclosure communities believe that the declassification of black space programs could reveal that the US government was complicit in widespread suppression of critical technologies that could have improved the quality of human life decades ago, or worse, used corruption, coercion, blackmail, and plausible deniability to achieve a nefarious agenda for many years through various secret space programs.

If any of this turns out to be true, then declassifying space programs and research could either open the doors to wonderful new possibilities for the betterment of society, or it could expose corruption and other heinous crimes on a massive scale. Perhaps both.

A few things are certain. UFOs exists, but the government says it hasn’t a clue where they come from or what technology is being used.

The Space Force is being launched, and declassification and disclosure needs to happen to put to rest the many questions surrounding the origins of advanced technologies being observed in our skies, as well as all the implications, pleasant or otherwise, that come with it.

Concerning the origins of this advanced technology, without full disclosure all we can do is speculate based on the quality of information we seek and receive. As always, it’s important you do your own research. Logic, reasoning, and a little bit of faith can reveal a lot.

Many of their ideas are shunned by most of the mainstream, but I believe they do serious work with the best intentions, and I always consider what they have to say — discerning all information with a grain of salt.