Google’s long awaited music service, Google Music Beta, was given a limited launch today at Google’s I/O conference in San Francisco, but with Amazon’s Cloud Player already launched and iTunes poised to begin music streaming  it is too little too late?

Today’s announcement of the cloud-based “music locker” was not the game changing gmail-style product many were expecting.  While the specifications are impressive, its invite only, US launch and lack of support from major music labels make it a difficult sell.

The private-beta launch specification are,

Google blurb for the application says, “[With Google Music Beta you can] upload your personal music collection to a single library, even if it’s scattered across multiple computers. You can upload music files from any folder or add your iTunes® library and all of your playlists. And when you add new music to your computer, it can be automatically added to your music collection online.”

But the site’s launch is undermined by the service’s lack of support from the major music labels, which Google described as being “unreasonable” during negotiations.

As Spotify will attest, American music publishers are reluctant to give away access to their libraries. This lack of industry supports effectively relegates Google Music to an advanced musical DropBox as opposed to the, no pun intended, all-singing-all-dancing music purchasing and storage service it could be. Indeed, TechCrunch, who have early access to the site, described the application as having an “emphasis is on the ‘beta’ right now.” 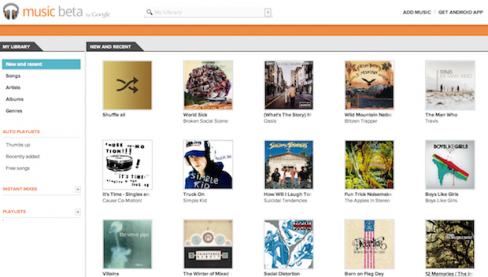 Today’s reports say that Google Music will be free while in private-beta but we don’t know what the full post-beta pricing structure will be.  Google also has to announce when the site will receive a full global launch. At the moment visitors from outside the USA are showen this message.

Google has an uneven relationship with music.  In 2009 it launched it music search engine, only to under promote it and then shut it down in late March 2011 (except for in India). Google has even gone as far as using a server file to prevent its own and other search engines from indexing the music search site.

Alongside the announcement of Google Music the company announced that it would be making its YouTube library of cloud-stored films available for Android devices.  To reduce the cost of renting and streaming large media files Google has incorporated advanced caching into the Android app.  Users will be able to store each film they wish to see using a wireless connection for offline viewing later.

PlayStation Network services will resume in “a few more days”