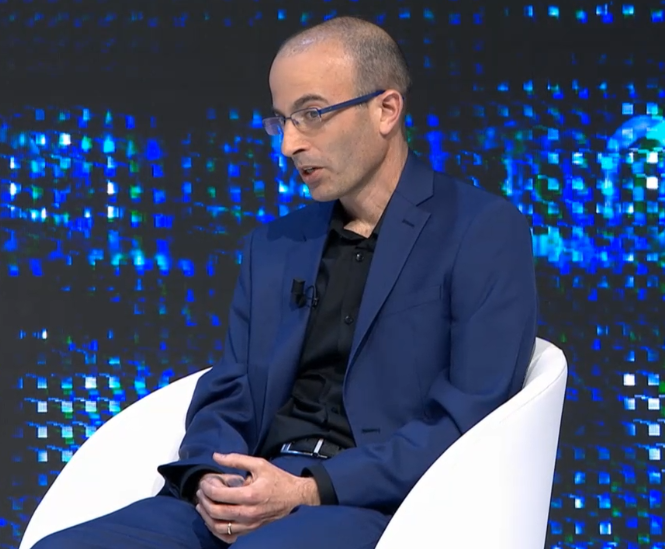 The most profound statement in over 150 years of biological research since Charles Darwin can be summarized in just three words, “organisms are algorithms.”

This is the biggest insight to come out of modern life sciences, according to historian Yuval Harari at the World Economic Forum in Davos.

Will the future of humanity be even human, or is our generation one of the last to be called homo sapien?

According to Harari there are two simultaneous revolutions taking place that have led scientists to the brink of hacking humans.

With the breakthroughs coming forward in these two revolutions occurring on this planet at the same time, we now have the tools at our disposal to hack humans.

So, what does it take to hack a human?

Again, according to Harari, there are only two necessary ingredients to hacking humanity:

With machine learning, this level of computing power has been achieved. Biometric sensors have launched us into age where we can monitor every aspect of biological life to the point that the computers more know about us than we do ourselves.

Data is the most important asset in the world

What do all of these processes have in common? Data. “Data is the most important asset in the world,” said Harari.

In the past the most important assets used to be land and then later machines, but now it is data. But who owns this data? If it is your personal, biological data, do you really own it, or is it the property of corporations, governments, or the elite?

Think about that. If humans can be hacked, and they certainly can be, then those who control their data are the hackers.

Machines know us better than we know ourselves

Right now, the big concern over privacy mostly relates to how companies are collecting our data, so they can sell us more junk we don’t need. We all know that our governments are surveilling us constantly, but we just accept it without putting up much of a fight. “I’ve got nothing to hide, so why should I care?” is the common argument.

Turns out there is plenty to be concerned about. To give an example from Harari, he said that machines know us better than we know ourselves. At age 21, he came out as gay after struggling with his sexuality all his life. But now the technology exists to build machines that can track eye movement, blood pressure, heart rate, and brain activity, so that an actual ‘gaydar’ can be used to find out where people lay on the gay/straight spectrum.

It seems harmless at first, if not awkward, but what if you take the same data and give it to corporations or the ruling class?

Take this a step further, and hand over this information to governments and they will know everything that makes you tick and how to control you.

Referring back to the gaydar analogy, where will we be when governments can supposedly predict what decisions we make before we make them? Will there be such a thing as free will, or will the computers label us as criminals-in-the-future in some Minority Report-like nightmare?

Towards a digital dictatorship

A digital dictatorship will be one where information and decision making is concentrated to just one entity, the machine. If this happens, where would democracy play in?

“AI and machine learning might swing the pendulum,” says Harari, towards making centralized data processing more efficient. If democracy can’t adapt, we become under the rule of the machines.

This will lead to a surveillance state, more so than it already is. If left unchecked and unregulated with the power of computing and biohacking, the elites will be able to re-engineer the future of life itself.

Bioengineering a new species of human

According to Harari, once you hack something, you can definitely re-engineer it. That is why he believes that within a century or two, “earth will be dominated by entities that are more different than us than we are different from neanderthals or from chimpanzees.”

The transhuman agenda is happening now. It’s being programmed into our subsconsciousness through movies, art, and the media.

We are entering an era of inorganic life, and if this technology is not regulated, a tiny elite can shape the lifeforms of the future. Those who have the money and the power to infuse their bodies with AI will become a new species, capable of feats we cannot even imagine at this time.

None of this would be possible without big data and how to process and make sense of it through machine learning.

Who should regulate data ownership?

The elite are not ready to be entrusted with the future of life. “They seem incapable of producing meaningful versions of the future,” Harari said.

So, what’s the solution? Who should regulate ownership of the data? Unfortunately, not even the good historian has an answer, but he left a clue.

Apart from calling upon scientists, philosophers, lawyers, Harari believes there is one group above the rest, more qualified and more conscious about the human condition than all the others — poets.

These music makers and the dreamers of dreams are humanity’s best hope. John F. Kennedy understood this best when he remarked:

When power leads man towards arrogance, poetry reminds him of his limitations. When power narrows the areas of man’s concern, poetry reminds him of the richness and diversity of his existence. When power corrupts, poetry cleanses, for art establishes the basic human truths which must serve as the touchstones of our judgement. The artist, however faithful to his personal vision of reality, becomes the last champion of the individual mind and sensibility against an intrusive society and an officious state.