HomeTechnologyHow VR will give students an unimaginable education
Technology

How VR will give students an unimaginable education 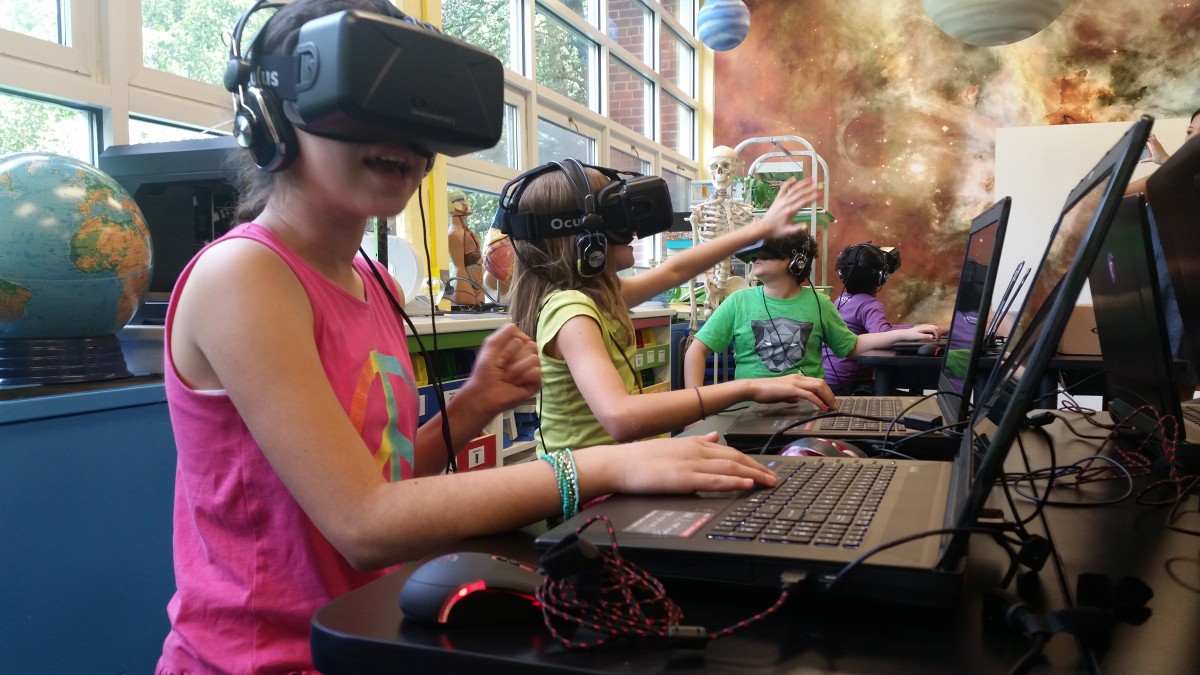 As VR technology becomes more affordable, the implications for a Virtual Reality-based education will allow students to travel the globe while never leaving the classroom.

While VR has been known or at least glimpsed at even before cyberpunk took off in the 80s, its promise mostly died during the 90s. Well, it’s a resurging phoenix now, with Oculus Rift being the spark that reignited the fire. And as with many other things, VR has huge implications for education, too.

As it stands, virtual reality stands to make learning more efficient. It’s commonly accepted that students remember 20% of what they hear, 30% of what they see and up to 90% of what they do; or in the case of VR, simulate doing. Initiatives like Unimersiv are working on that interactivity. Students can now learn by doing, like going around a VR construction site and taking VR pictures of workplace safety violations.

Or they can be transported to Salisbury Plains, England 4,000 years ago, to walk around the simulated Stonehenge. For medical students, there are VR simulations that let them examine bits of the human body while adding or removing layers of muscle, cartilage and so on.

One of the most important points for education is that VR is getting cheaper as it is getting bigger. Sure, Oculus Rift costs about $600, while HTC Vive is even more expensive. However, cheaper options abound, too.

Google Cardboard is as basic as it gets, with the most complex part being the lenses (and, of course, the smartphone that you have to provide yourself), but it‘s a formula that can work with both heavily “technologized” children of today and university lecture halls.

READ MORE: How education technology in the classroom empowers students

There are more expensive and thus more sophisticated options out there (headstraps included!) which leave up to the individual to decide how expensive their VR headset will be. And if you can‘t even afford the smartphone that mobile VR headsets require, you might have more pressing matters than VR.

However, companies are more than happy to help with various VR education initiatives. Mission V is an Irish platform that works to provide children with the tools and the headsets needed for VR learning programs. Nearpod uses branded Google Cardboards and allows teachers to take children on 25 virtual field trips that involve first-person tours of the ancient pyramids of Egypt, Easter Island, Great Barrier Reef, Mars, landmarks across the US, and the tallest buildings in the world in Dubai.

The cost of VR

So far, Nearpod licenses cost a hefty $1,000 per school or more, but the company has raised more than $100,000 in grants from  Knight Foundation, Marc Benioff, and Krillion Ventures to give schools access to their programs. Even the big kids were in on the show. Google launched Pioneer Expeditions, which gave schools around the world everything they needed for VR lessons, if only for a day:  Asus smartphones, Google Cardboard viewers or Mattel View­Masters to turn them into VR headsets, a tablet for the teacher, a router that hosts Expeditions without any internet connection and a library of more than a 100 virtual trips ranging from the Great Wall of China to Mars.

VR education will be cheaper in the long run. It is something that NASA and the military recognize. VR learning doesn’t use fuel and other consumables; it saves space and is safer. For schools, it‘s a more frugal option that saves on all sorts of travel expenses and tickets. Furthermore, it lessens the stress on teachers because they no longer have to be chasing children all around a museum. And some trips are really impractical as far as schools and classes are concerned — few schools can afford to send children out to see the pyramids, and no amount of actual field trips would show the pyramids in their original white glory.

And while it would be hard to experience something like British Museum‘s Bronze Age exhibit by yourself, VR tours of the inside of Salvador Dali‘s paintings (now offered by the Dali Museum) are actually impossible in real life.

VR for the humanities

Another benefit of VR education can be increased empathy. VR experiences like the Displaced can help children understand the hard situation of the children who were driven out of their homes by war experience. It can also educate adults in the same way. Another thing is that VR can bring children from various countries together like it was impossible before. AltspaceVR and others are already working on social platforms for VR, so it‘s not a big leap to make an app joining classrooms across the world. Another benefit of VR is that it erases all sorts of physical limits, letting minds touch each other freely.

And you too can be a part of this experience. Game engines usually support VR creation these days, and they‘re free, and relatively easy to use. Various 3D models, especially realistic ones, are available on stock 3D model marketplaces. You can easily construct spaces and areas to teach children or older students about anything. And the world needs those lessons now!

Martynas Klimas is THE staff writer at CGTrader.com . He knows a bit about 3D modeling, some about 3D printing and a lot about video games. His writings have been published on tech blogs and video game websites. Martynas likes video games, miniature wargames, and books. No walks on the beach, though.