HomeTechnology‘The application puts the broadcast in their own hands and encourages drive and ambition’: Becoming a star athlete with Cleatchaser – Interview
Technology 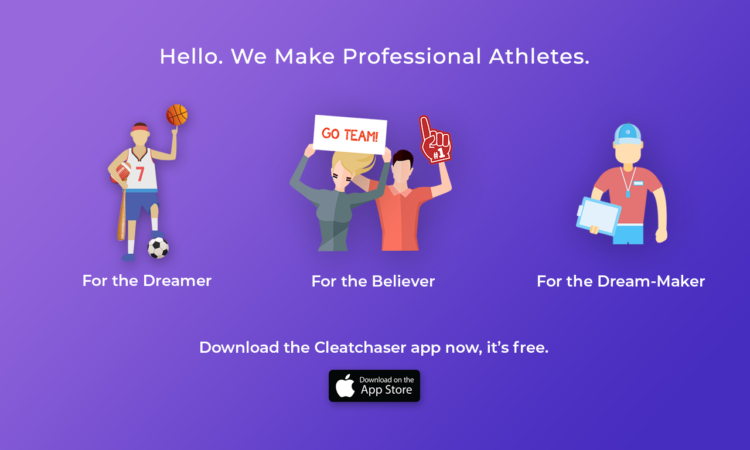 As previously discussed here on The Sociable, getting your name out there as an aspiring athlete can be difficult. However, thanks to Cleatchaser determined athletes now have a platform to advertise their skills which can hopefully allow them to excel in their career. To get a better understanding of this industry and the goals of Cleatchaser, we spoke with Antonio Ardila, the founder and CEO of Cleatchaser.

I understand there are not many platforms for athletes to showcase their talent. What was the main motivator to solve this problem, for example, did it arise from a personal experience or something you recognized others having issues with?

It arose from personal experience. I was a decent wrestler and maybe could have saved a bit of college debt had I the right platform to showcase myself and landed a scholarship. There were a few colleges interested in me, and others had sent the generic letters of interest, but I was too naive to realize the opportunity and did not have the right ‘pusher’, it is actually one of the biggest regrets in my life!

I remember a video my coach captured of me in 10th grade. I was wrestling the stud of the district who went on to place 6th at state that year. I had been practicing a move called The Peterson that was fairly difficult to pull off. The video captured me executing The Peterson, my teammates and coaches went wild! The move puts the opponent in a very compromising position, they were all yelling “SQUEEZE! SQUEEZE! SQUEEZE!” at the top of their lungs. Coach Mack captured it in his camcorder, and I watched it over and over again on the bus ride home. I wish I had that video. The app I’ve built is for the boy on that bus.

In addition, I had many a friend with so much athletic talent yet lacked formation, grades, maturity etc. like so many other youths in urban communities. For example, one of my classmates could dunk so high and so loud! He was the perfect build, and his shot needed coaching, but the crowd went wild whenever he jammed it. His grades weren’t there either. There are plenty of colleges and junior colleges that could have benefitted from a player like him. He never went to college at all. Sadly, he is currently serving a 30-year sentence for a non-violent crime.

Another major opportunity I realized was on the international scale. In my opinion, sports are such a healthy energy outlet for communities. There are so many dreamers around the world who pray for so much as the slightest chance at playing at the elite level. The application puts the broadcast in their own hands and encourages drive and ambition.

Can you give an example of a user that has really benefited from Cleatchaser, either as an athlete or a talent scout?

I really like a minor-leaguer on there, a pro basketball player in Panama, and a Scandinavian soccer player but I think the fans are actually the ones benefitting from watching MJ.

He’s a 5-year-old T-ball player who is having a genuine baseball swing being developed. His father posts some DIY practice methods that have gotten a lot of love. For example, he sets him up just far enough from a wooden fence to tighten his swing closer to his body. The wood fence is has scratched off paint from the swing which shows the time they’ve spent with this method. Left is a screenshot for reference

What do you consider Cleatchaser’s greatest achievement within the past 6 months?

This is one easy: going live on both platforms at the end of April of this year.

What is the main focus for Cleatchaser over the next 6 months?

Releasing our grand feature, and the purpose the app was created to begin with. It will use camera technology for sports in a way that I have not yet encountered.

So far, they have been asking for login integration with instagra+facebook. We avoided these deliberately, as we actually consider Instagram a competitor.

On a separate more personal level, who is your favorite athlete?

My favorite athlete is Carlos Sanchez of the Colombian Soccer team. He is so not known, so much so that I have not been able to find his jersey after looking for years. I think he is highly underrated