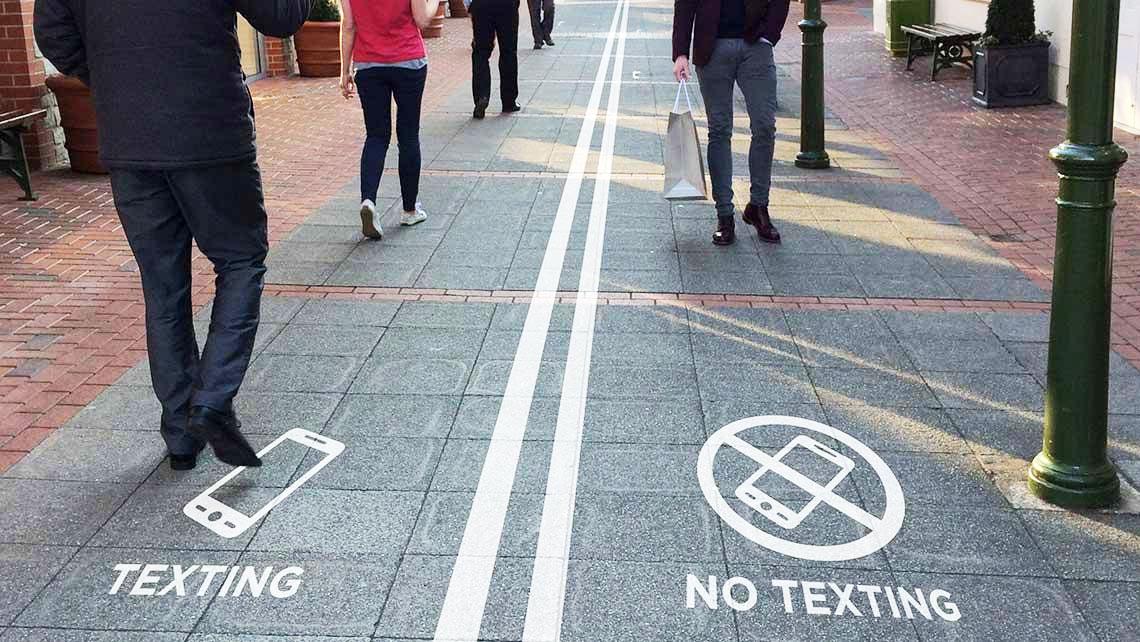 Texting while mindlessly meandering on the streets has gotten so literally out-of-hand that major metropolises around the world have created texting lanes to prevent people from bumping into each other, or worse.

Ironically, the most human contact a person walking and texting will receive is a sharp smartphone to the chest from another unaware pedestrian. But now, even that intimate brush with a stranger is being phased-out thanks to “innovative” cities introducing texting lanes in the US, China, Belgium, and now Germany.

Augsburg, Germany is the latest city to install traffic lights on the ground for those too out-of-touch with reality to even look up before crossing the street.

“The idea to install such traffic lights came after a 15-year-old girl was killed by a tram. According to police reports, she was distracted by her smartphone as she crossed the tracks,” according to the Washington Post.

The city of Chongqing, China was the first to implement texting lanes as a means to prevent “zombie hordes of texters” from colliding with other absent-minded sheeple. Since then, Washington DC, and Antwerp have followed suit, but it highlights major concerns.

While the implementation of texting lanes was a logical response to potentially dangerous situations, such as ambling into incoming traffic, it also enables people to be out-of-touch with their surroundings.

We don’t have designated drunk driving lanes, nor do we have designating texting lanes for drivers, as that would obviously encourage more irresponsible behavior. Pedestrians; however, get a free ride to Dumbville with the introduction of texting lanes that actually promote antisocial behavior while eliminating the need for human interaction.

Coupled with an ever-growing addiction to technology that has left some bordering on depression and withdrawing from society, is the failing of social skills across the board.

In the US, Internet addiction is being considered as a mental disorder. The 5th edition of Diagnostic and Statistical Manual of Mental Disorders (DSM-5), lists Internet addiction as a new phenomenon that could warrant a mental illness classification.

According to the report, when individuals “are engrossed in Internet games, certain pathways in their brains are triggered in the same direct and intense way that a drug addict’s brain is affected by a particular substance. The gaming prompts a neurological response that influences feelings of pleasure and reward, and the result, in the extreme, is manifested as addictive behavior.”

You won’t find any texting lanes here where participants as young as eight years-old are subjected to “discipline and repetition.”

According to CNN, “Their personalities are annihilated […] behind a formal posture of silence and obedience.”