HomeBusinessWhiskey barrels towards blockchain, challenges for bootleggers on the horizon
BusinessTechnology

Whiskey barrels towards blockchain, challenges for bootleggers on the horizon 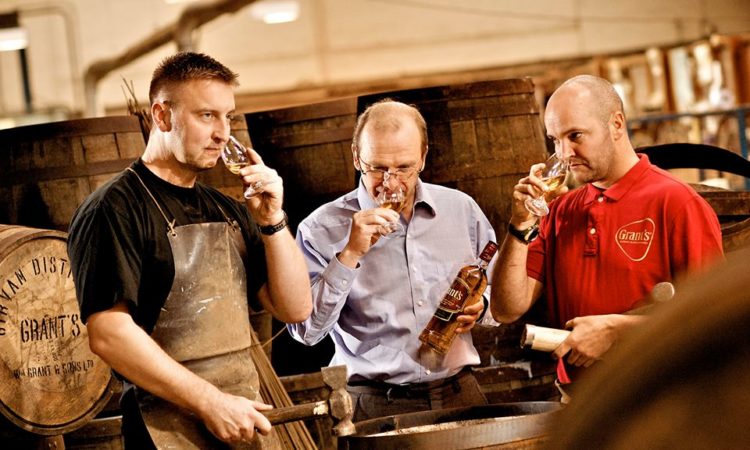 As whiskey and fashion companies begin to implement blockchain-based goods tracking systems, is the game up for counterfeiters?

“Gather up the pots and the old tin cans
The mash, the corn, the barley and the bran
Run like the devil from the excise man
Keep the smoke from rising, Barney”
— Hills of Connemara, Irish Folk Song

It emerged on Tuesday that two prominent brands – Louis Vuitton and Scottish whisky distiller, William Grant – have commenced blockchain projects to track their products through the blockchain, Coin Telegraph reported on Tuesday.

LVHM, the French multinational behind Louis Vuitton, is in the preparatory stages of launching a blockchain which will facilitate the authentication of its products, according to Coin Desk.  Initially, the system will be rolled out for the Louis Vuitton and Christian Dior brands – with all of LVMH’s other brands to follow.

The company has developed the project using their own in-house blockchain team, whilst collaborating with blockchain software technology company, Consensys and a team behind cloud computing software platform, Microsoft Azure.

Additionally, LVHM intends to make the system industry agnostic, promoting it on a white label basis with the aspiration that competitors will join the project.  Intellectual property associated with the blockchain system is being vested in a separate company.  Other participating companies will be encouraged to sign up – and share in that IP and access to the system.

Meanwhile, William Grant has partnered with Arc-net in an effort to track its Ailsa Bay premium Scotch whisky product in the UK.  Key data such as cask types and filling and bottling dates will be recorded in order to provide authentication and traceability from source to store, whilst stamping out counterfeiting.

The UK drinks industry loses £218 million ($288 million) each year to counterfeiting and its hoped that blockchain-based systems like this one can curb that activity.

Counterfeiting of premium branded goods is an industry in itself with a value in the region of $1.2 trillion globally. Whilst that’s an estimate given the clandestine nature of the business, seizures back up those figures.

Blockchain meets the use case to fight bootlegged products due to some of its primary characteristics.  Distributed ledger technology facilitates the immutability of the ledger and by implication, the transparency that is required to demonstrate a supply system with integrity – to the mutual benefit of all stakeholders.

The transition from one point in the supply chain to another can be recorded on the blockchain.  This can extend from the input stage of raw materials right through to production, distribution, sales and beyond until end of product life.  The ease of visibility with regard to materials, production, etc. for stakeholders is likely to provide them with a record they can believe in as records cannot be altered on an immutable blockchain.

“And policemen all from Donegal, Sligo and Leitrim too
We’ll give them the slip and we’ll take a sip of the real old mountain dew”
– Mountain Dew, Irish Folk Song

We are still in the early stages of adoption of blockchain technology for the purpose of stamping out counterfeiting.  However, the fundamentals are strong and so long as implementation is well thought through, the potential of it making a significant impact is tangible.

At this time, specialist blockchain technology companies are diligently applying solutions as an integral part of supply chains in this field globally.  The systems that they implement are likely to aid businesses and society generally to varying extents depending upon the use case.

Lets take LVHM’s efforts outlined above as a case in point.  There’s no doubt that we all want to encourage a world in which intellectual property is respected.  However, the impact of the effective application of blockchain technology in this instance is not equal to its application in other industry sectors.

LVHM produce luxury goods that are priced out of the reach of ordinary people.  The societal attitude to counterfeiting in this instance is not the same as it would be for foodstuffs and medicines.  It will be beneficial to both the manufacturer and the consumer insofar as users will know the product they’re buying is authentic.  However, there are many sections of society that are likely to knowingly opt for counterfeit luxury goods.

The real difference the implementation of this technology is going to make for society is in recording supply chain data when it comes to medicines and food.  Counterfeit drugs have long being an issue.  The implications of counterfeit luxury goods pale into insignificance by comparison with counterfeit medicines.  If drugs are replicated and manufactured on the gray market, it’s highly unlikely that the required quality controls will be put in place.

Ten percent of drugs sold in developing countries are fake.  In a market that’s estimated to be worth $30 billion, it’s entirely likely that fraudsters motivated by greed will put ordinary people at risk as a consequence.  In sub-Saharan Africa, deaths in the hundreds of thousands are attributed to fake antibiotics and fake anti-malarial drugs.

It’s here that the impact of blockchain-based systems will materialize for the good of society.  Work Is already underway in this regard with global tech behemoth IBM working on a blockchain solution to track medications in Africa.

In a similar vein, food traceability brings the same benefits.  Adoption in this instance has progressed further along with many of the worlds largest retailers involved.  It’s likely that there will always be a certain level of bootlegged goods but so long as this is curtailed and stamped out when it comes to items that can do real harm, blockchain will have served society well.