HomeWebHands on: Chrome OS gets a desktop and windows
Web

Hands on: Chrome OS gets a desktop and windows 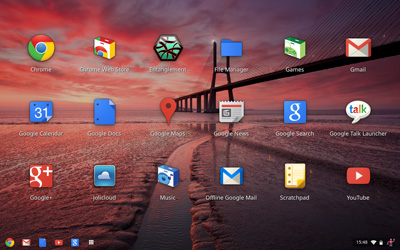 As with any new project undertaken by Google we’ve been following along attentively. While Chrome OS doesn’t appear to have garnered any real traction yet, it’s still early days and it’s obvious with this update that Google still has very real plans for the platform.

The latest build, only available through Chrome OS’s developer channel, looks more like a traditional desktop than its previous browser-only presentation.

Other welcome features include the ability to set desktop wallpapers, transparent overlapping windows and support for tar, gz and bzip2 file formats.

The new version of Chrome OS feels less limited than its predecessor, but it’s no replacement for a traditional laptop.

So where does Android come in? Both Android and Chrome OS are growing more and more in convergence, similar to the way Mac OS X and iOS are merging, interface wise at least.

Can anyone else recognise a hint of Ice Cream Sandwich now in Chrome OS or is that just me?