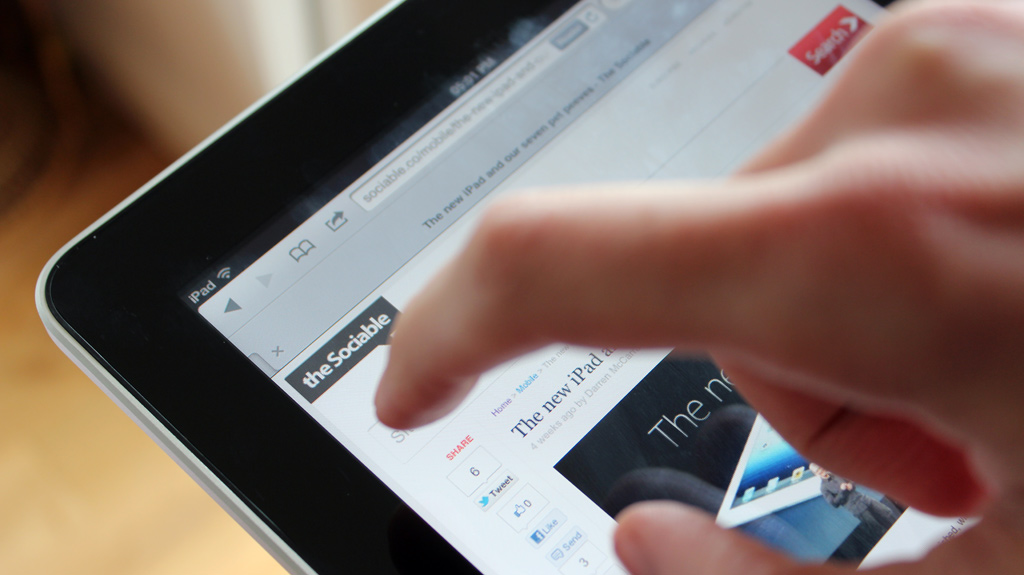 Michael Carroll (@quantumprophecy | Facebook), author of the acclaimed Quantum Prophecy novels and many other books and comics(including Judge Dredd for 2000AD!), takes a wry look at the relentless march of technology and tells us why the iPad ain’t all that advanced.

So, the other day my friend showed me a short story on her iPad and said, “You have to read this – it’s really good.”

I have read short stories before – several times, in fact ­– so I pretty much knew what to do: read the word in the top-left and then the word on its right, and keep going until I get to the end of the line. Then I go to the very leftest word on the next line down, and so on. Simple, really.

But then I reached the last word on the last line, and I was momentarily stuck. With a story written on paper, I know to turn to the next page. Or if I’m reading on my PC, I click the “next” button or hit the page-down key. But this was on an iPad. There are no buttons except a little recessed one at the bottom of the screen and that clearly wasn’t the right one. I had to ask my friend what to do to get to the next page of the story. 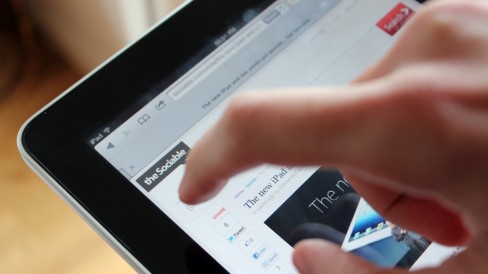 On the day that this event happened, I was forty-six years and thirteen days old. A bit embarrassing, I guess, to have reached this great age and never had the alleged pleasure of using an iPad, or even touching one. In fact, the last time I used anything made by Apple was back in 1985. It was an Apple II personal computer.

Yes, you young folk with your new-fangled tech are even now probably rolling your eyes and thinking, “Gee-whiz, granddad, wake up and smell the twenty-first century or the coffee or the roses or something, dude! Word.”

Well, kid, it’ll happen to you too, you know. In a quarter of a century or so – assuming that the Earth is still here and you manage to avoid being captured by the apes on horseback or the giant super-intelligent badgers or whatever else happens to be currently marauding the desolate wastelands – you’ll find that all the younglings are using technology that you just don’t grok.

(Incidentally, if you know what the word “grok” means – and where it comes from – then you’re probably at least my age so I’m guessing you’re more likely to be on my side in the coming “War of the Younglings” wherein all the old fogies like us rise up and reclaim the world for the people who understand that there were books before Harry Potter, don’t know or really care who Kanye West is, laugh at those “fashionable” jeans where the crotch is around the knees, can remember when there was still a possibility that Luke and Leia could get together without it being creepy, and still think of Ozzy Osbourne as a musician and not a reality TV star.)

So, what did I think of the iPad? It was interesting. You poke at the icons and things happen, like games and stuff. I’m sure that given enough time I could come to like something of that nature, and get used to all the different apps. (Tech note: the word “App” is short for “Application” which is a new and utterly needless way of saying “Program” – my guess is that Apple chose it because they wanted people to think that it’s an abbreviation of their company name. Well done them, because I’ve recently encountered “app” being used to describe long-established programs like Microsoft Word).

I’m certainly not as tech-savvy as I probably should be. My mobile phone is a Nokia 6020, purchased in 2005. It has lots of handy features that I have never used, or been interested enough about to find out what they actually are, like “Push to Talk.” I’ve never bought a ringtone for it. It has a camera, but pretty much the only photos I’ve taken are of the inside of my pocket.

I have an mp3 player, too. I’m on my third or fourth one of those. I can’t remember the name of the manufacturer, but it’s not an iPod. I’m sure that iPods are lovely and exciting, and like all modern Apple products they’re very pretty, but I bought my mp3 player so that I could listen to music. I don’t care in the slightest what the thing looks like, so I went for one that was half the price of an equivalent-spec iPod.

But in this household we don’t have a Nintendo Wii, or a Playstation 3, or an XBox whatever, or any kind of home games console. We don’t have a Blu-Ray player – our DVD player is good enough. It was only last year that we switched over to digital TV, and that was only because we didn’t have much of a choice.

Now, you’d be forgiven for thinking that because I’m old I don’t understand technology, but you’d be wrong. I spent fourteen years as a computer programmer and systems analyst, totally self-taught – I left school at 16 and never went to college. I can program fluently in seven different languages, including machine code. I have built PCs from the motherboard up. I have written operating systems. Heck, I even created my own programming language and wrote a compiler for it – and it still works.

So it’s not that I don’t understand technology, it’s just that I’ve reached a saturation point. I honestly don’t care all that much any more. It takes a lot to get me excited about new tech, and poking at a screen instead of using a keyboard just isn’t innovative enough for me. Yes, I’m sure it’s all very clever behind the scenes, but whether we’re using a finger or a mouse, we’re still just clicking icons, and that idea’s been around for decades: at least with a mouse we don’t have to suffer that niggling little problem that will only be alleviated when some bright spark at Apple invents the iTransparentHand.

Hands on: Chrome OS gets a desktop and windows