HomeWebReport: The West benefits most from the web but more data is needed
Web

Report: The West benefits most from the web but more data is needed 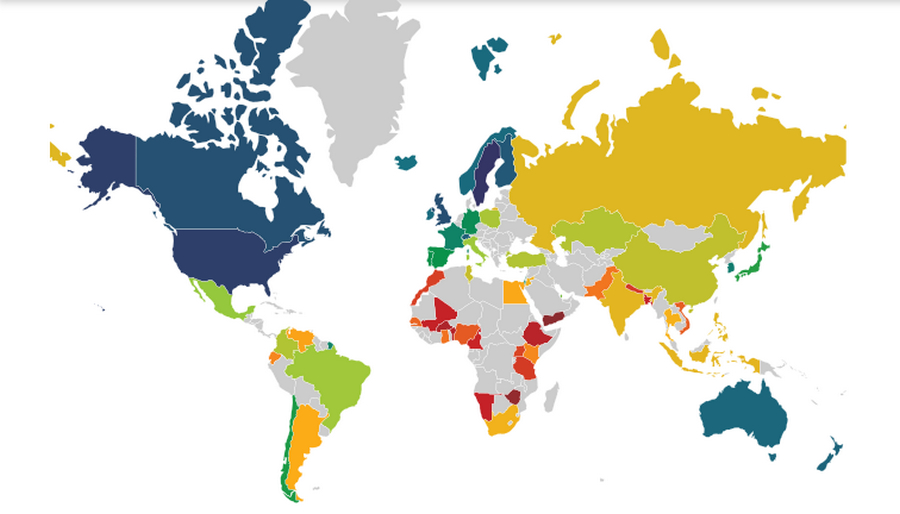 The web is having the greatest impact on the development of European and North American countries, according to data released by Sir Tim Berners-Lee’s World Wide Web Foundation.

The data, or lack thereof in many parts of the word, suggests that the digital divide is a prominent as ever with Western citizens benefiting more than most of the rest of the world from advances in web technologies and services.

The index measures the “value” the web provides citizens in 61 countries across seven areas (see full list to countries at the bottom of this post);

Among the data collected, the Foundation looked at how accessible the government was online, how the government uses open licences, the use of website by political parties, how many people use the web, the use of the web by the elderly or disabled etc.

Eight of the top ten countries are from North America or Europe; New Zealand and Australia make the top ten in 7th and 8th place respectively. Sweden, with a web index of 100, holds the top position and has seen the greatest impact of the web according to the results.  The United States of America is second with a score of 97.31.

The West might benefit most from the web but only four of the top ten countries are members of the EU (two other European countries – Switzerland and Norway – on the list are not part of the EU). Sweden and Ireland bookend the top 10, while the UK and Finland hold the third and fifth places respectively.

The data holds some surprising results; South Korea, the world’s most connected nation, is 13th.  The report says that while South Korea might have a strong infrastructure it scores low web use and web content.

The US comes second on the list ranking well in the social and political areas.  However, the country is prevented from accessing the top position because of a lower percentage of households that own a personal computer and slower bandwidth.  But the country ranks well for web content and web use.  The United States government’s use of the web comes in for praise.

The UK comes in third thanks to its large number of broadband users as well as its large number of mobile users.  The UK’s average broadband speed, 166,073 Mbits/S, out ranks the US, 47,174 Mbits/s, and the Foundation considers its content more accessible, which the report says “has been boosted by various public sector initiatives.”

Australia – the report says that the web has had a relatively small impact on the economy but has made a social impact in the country. The “lower rate of broadband penetration, slower bandwidth” causes it to fall behind European and North American countries.

Ireland has focused its economic efforts on cloud computing but the same political effort has not been put into engaging the country’s voters in the national politics arena.

Ireland comes in in 10th place on the list, with an index of 87.42.  In spite of the country’s economic hardships it scores 100% for the web’s impact on the economy.  The Foundation says that between 2007 and 2010 Information & Communication Technologies (ICTs) accounted for 14.8% of Ireland’s GDP, a figure which is “exponentially ahead of any other nation.”  But Ireland significantly lags behind other nations with the use of the web in national politics – Chile, Colombia and Egypt all out pace Ireland in this regard.

The Foundation says that the Irish government needs to work harder to use the web to engage and interact with citizens.  This comes after the last general election in the country when the winning party said “Cloud Computing represents a huge opportunity for Irish firms, public bodies and the economy as a whole.”

Further showing that economic issues are not a barrier to web use, Iceland, a candidate member state of the EU outperforms most EU countries on a number of factors, “Among other indicators in this area, Iceland offers the fastest Internet speeds in Europe on average (and the second in the world), and boasts the most households with personal computers. It also takes first place regionally in terms of Web use.”

No data exists for countries involved with the 2011 Arab Spring protests, save for Egypt.  Egypt comes in at 44th place, recording its largest web impact in political and social areas.

Speaking to Wired Tim Berners-Lee, the creator of the web, said that the perception of the web needs to shift from that of a luxury service to that of a necessity;

“It’s seen as a luxury, when in fact using small amounts of data is just the thing that lets the farmer operate much more efficiently.

“We hear a lot of anecdotes about how people in rural Africa are using the internet to bring wealth to their local region, but where is the data? There are no other indexes out there that address not just connectivity but the web and the world of information. Is it really functioning and helping humanity? Is the web serving the world?”

Berners-Lee warns that the data is not complete.  Only 61 countries are covered in this release and some factors, including censorship, which could not be accurately measured had to be excluded from the data.  He hopes that more countries and indicators can be included in future data releases.

Data for the study was collected from existing sources and through a questionnaire.  The foundation says the questionnaire was designed to “fill in some [significant] gaps” in the data in some countries but the Foundation says that the data, which has been reviewed by the European Commission, is robust.

Use the dropdown menus to see individual countries.