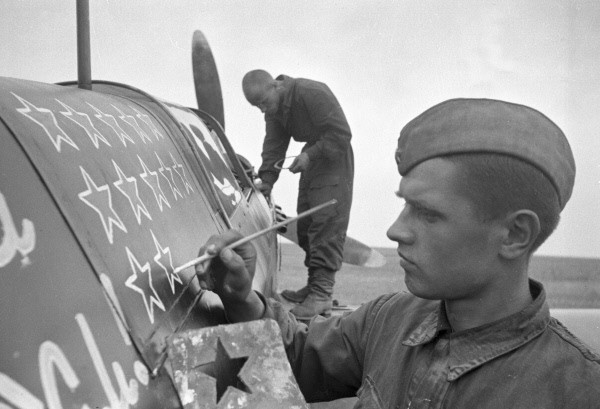 A soldier paints another ‘kill’ star onto the side of a Russian fighter plane as a mechanic inspects the engine in just one image of hundreds released by the Russian International News Agency (RIA Novosti).

As part of a joint effort by RIA Novosti and Wikimedia, the two organisations are releasing hundreds of never-before-published photographs from The Second World War.

The photographs show the full swath of the war on Russia, from Soviet IL-2 combat aircraft, to German Prisoners of War, to Russian citizens running for cover during an air raid.

RIA Novosti is releasing the images under a Creative Commons license (CC BY-SA 3.0) as part of what they call the Eternal Values Project to celebrate the 70th anniversary of the News Agency.