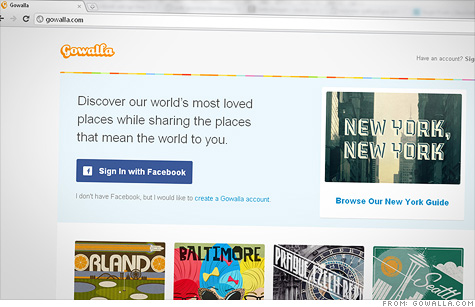 Facebook has reportedly acquired Gowalla, a travel check-in service used to share and discover interesting places, for an undisclosed sum, according to a CNNMoney report published early this morning.

The report suggests that the majority of Gowalla’s employees will be relocated from their current base in Austin, Texas to Facebook’s offices in Palo Alto, while a handful will remain in Austin and work out of Facebook’s local office there.

According to Gowalla’s website, the company currently employs 29 people – Facebook often use acquisitions as a means of sourcing great talent.

It’s understood that Facebook’s new arrivals will work solely on Facebook’s Timeline feature, which has yet to be rolled-out globally. CNNMoney’s anonymous source described the deal as a “perfect match”, and “as far as the big picture, Gowalla’s vision is about people telling stories, and Facebook’s vision for Timeline is about stories about important moments in life”.

It’s not yet known whether Gowalla will continue to exist as a standalone app, although it may likely follow a similar fate to recent purchases like Beluga and Hot Potato, which folded into Messenger and Places respectively.

The acquisition has not yet been officially confirmed by Facebook, who offered the usual “we don’t comment on rumor and speculation” response.