HomeBusinessMedellin’s many attractions for the Global Entrepreneurship Congress 2016
Business

Medellin’s many attractions for the Global Entrepreneurship Congress 2016 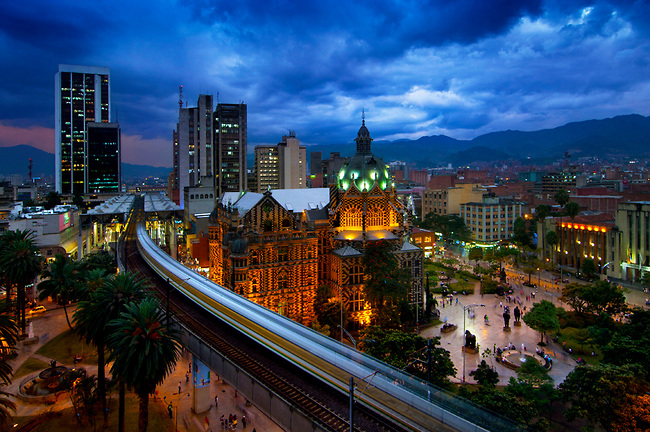 The elevated Medellin Metro is in motion as it rushes into the Parque Berrio Station in front of the illuminated Palace of Culture in Plaza Botero in Medellin, Colombia.
3.3Kviews

Voted the most innovative city in the world in 2013, Medellin has shed its long-stigmatized past and has entered a new era of entrepreneurial possibilities.

This year’s GEC summit promises to build upon 7 years of international success, with over 100 countries represented in attendance by hosting a veritable feast of uniquely Colombian experiences.

This year’s agenda is a whole range of “what’s next” for wireless cities, connecting people, civic innovations, and scaling businesses.

The majority of the conference will take place in the Plaza Mayor’s Gran Salon, with a warm welcome from Medellin Mayor Federico Gutierrez.

Some keynote speakers at the event include Larry Alder, Google’s Project Link director, representatives from the World Bank (that should be interesting given the enormous decline in the peso), and a whole slough of startup CEOs joining the craze that is “Medell-Innovation.”

The itineraries are out for March 14-17, and it looks as though Medellin has quite a few surprises in store for those lucky attendees who make the trek to Colombia’s second-largest city, including yours truly with The Sociable.

In Latin America salsa dancing is a must, and the GEC is pulling out all the stops to ensure visitors receive a well-rounded experience in “paisa” culture by inviting them along for a salsa tour put on by Latina Union, a dance corporation which aims to keep children away from violence through the practice of dance.

Other activities include a graffiti tour of Medellin’s Comuna 13, along with a theater tour, and an exploration of the city’s botanical gardens.

If you do plan on attending, there are plenty of sights to see, and the food is absolutely delicious! Some notable regional dishes include the Bandeja Paisa, Cazuela, arepas, and of course, EMPANADAS!

Additionally, Medellin is home to the beautiful Jardin Botanico, and the city’s numerous parks are like portals to tropical rain forests with crawling vines, palm trees, and occasionally the dank, sticky smell of freshly burnt kripa (marijuana).

A short trip up through Medellin’s metro system and a breathtaking cable ride up to the mountains lands you in Parque Arvi, a natural park filled with exotic birds, lush forests, and mountains of mushrooms.

Also, this section wouldn’t be complete without mentioning the city’s hopping night scene in the El Poblado district, where gringos and paisas alike can grab a shot of aguardiente (fire water) while dancing it up in one Latin America’s hippest night cultures.