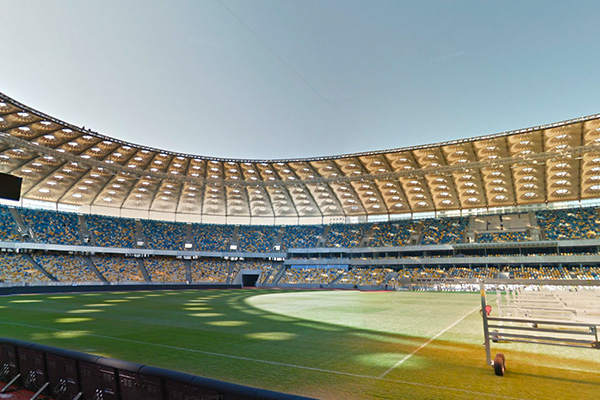 Euro 2012 kicks-off next week with Ireland in the tournament for the first time in 24 years. To help build excitement ahead of its opening, Google has published 360° imagery of all eight Euro 2012 stadiums, including the two stadiums where Ireland take on Croatia, Spain and Italy.

For the 20,000 or so Irish supporters expected to attend each of Ireland’s three opening games, and for those at home not travelling, the imagery offers a chance for fans to preview the grounds and experience what lies ahead.

The tournament is hosted by Poland and Ukraine, though all of Ireland’s three group stage games will be played in Poland. The first is against Croatia on June 10 at the Municipal Stadium, Poznań. Ireland’s second game is against current champions Spain at the PGE Arena, Gdańsk on June 14. Then on June 18, Ireland play their third and final group stage game against Italy, revisiting the Municipal Stadium.

If Ireland make it to the quarter-finals they’ll travel to Ukraine and play in either the Donbass Arena, Donetsk or the Olympic Stadium, Kiev. If Ireland progress to the semi-finals (always the optimist) they’ll play again in Donetsk or at the National Stadium in Warsaw, Poland.

Finally, if Ireland make it to the final (forever a fantasist) they’ll play at the Olympic Stadium in Kiev, Ukraine on July 1.

As well as street-level imagery, Google has also published 3D imagery for many of the tournament’s stadiums, like this one in Poznań where Ireland play two games.

Dublin gets an alternative angle with new 45° aerial imagery