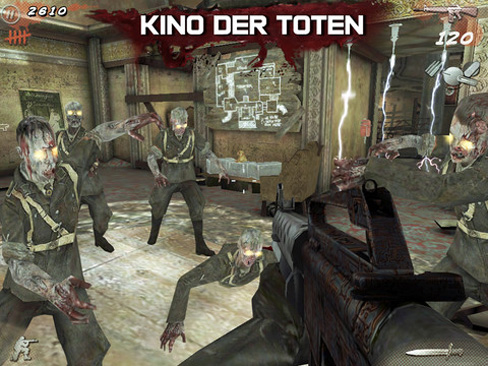 Call of Duty has made a return to the Apple iPhone, iPad and iPod Touch as game publisher Activision releases another iOS spin-off title Call of Duty: Black Ops Zombies.

The game is said to be “adapted from the best-selling console hit” and built specifically with “tablets and smartphones” in mind. Black Ops Zombies delivers maps and weapons “never before seen on mobile”, as well as 50 levels of an “arcade-style top down shooter” mode known as ‘Dead Ops Arcade’.

Players can take on zombies solo (not wise) or can join a team of up to four players. Black Ops Zombies also includes Voice Chat, a new feature to the Call of Duty Zombies mobile experience that “allows you to communicate with your fellow zombie-slayers in real-time” and “hear their screams for mercy”.

The universal iOS app has been “optimized for 3rd-generation devices and higher”, so graphics and performance should look and feel exceptional. The game is a paid-for app, available for €5.49 in most parts of Europe, £4.99 in the United Kingdom and $6.99 in the United States.