What can we expect from the NVIDIA GTX 690

It wasn’t long ago that NVIDIA released their GTX 680, the first of their Kepler line of GPU’s.

It was a roaring success: selling out as soon as it became available, bringing the top performance expected from the flagship single GPU card, all while undercutting the competition in price. 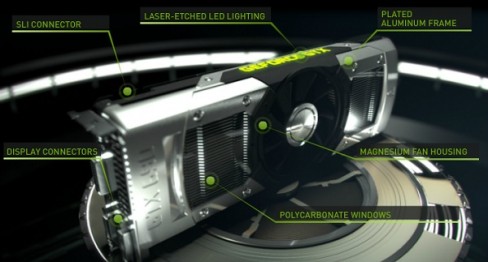 Now NVIDIA is launching the GTX 690, which will be available on the 3rd of May. The GTX 690, similar to the previous 590 will be a dual GPU card, featuring two of the GK104 GPU dies, those featured in the 680. Along with 4GB of RAM, although not the first consumer card available with 4GB, it will certainly be out performing those cards already released.

Since the GTX 680 was such a cool and power efficient card, it allows the GTX 690 to fully use two GPUs without having the same problems as similar previous cards.

It features dual vapour chamber coolers, one for each GPU and an axial fan positioned in the centre allowing it to better cool both GPU’s simultaneously. Much older designs featured the fan at the rear of the card in a blower configuration as with the GTX 680 and AMD 7970.

Although this proved ineffective with dual GPU boards, as the hot air from the rear GPU would blow over the heatsink for the second, resulting in one chip running hotter than the other. 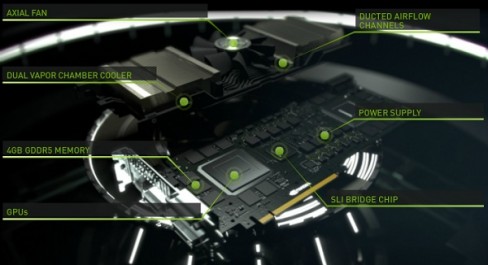 The specifications are very impressive, although as usual with dual GPU cards the Core Clock speed is slightly lower than that of the individual card. This is done to reduce the heat generated and power consumption within acceptable levels. Although thanks to Kepler’s Boost feature the max boost clock is still slightly higher than the Core Clock of the stock 680, meaning it will still be an extremely powerful card.

Despite the card featuring 4GB of VRAM, one must note that it’s actually 2GB per GPU, the same as on the reference 680. Although some manufactures will probably attempt to double the VRAM to 8GB; allowing both chips to have 4GB each. This is sure to eliminate any problems at very high resolutions.

What’s more impressive is the power consumption, usually these cards are very power hungry, but thanks to Kepler’s brilliant power and thermal efficiency it only has a TDP of 300W, which significantly lower than its predecessor’s (GTX590) 375W.

As expected NVDIA have produced their own benchmarks to showcase their new card, although marketing slides have a tendency to be a little bias. As such I would take them with a grain of salt and wait for other review sites to publish their results. 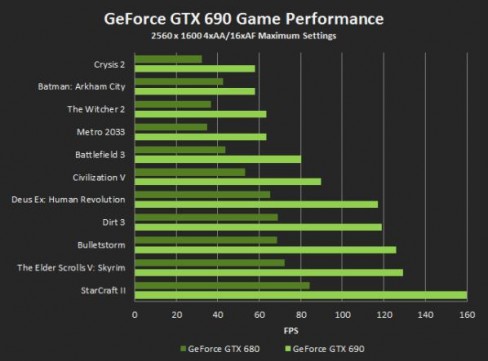 The performance shows is certainly impressive for a single card, although without a detailed breakdown of each game’s settings and the type of anti-aliasing used they might not show the full story. The price tag is a little off putting though, especially when comparing it to the previous dual card from NVDIA. Prices are sure to vary depending on where you shop and supply and demand will certainly play a role as well.

Even so the GTX 690 is bound to be an extremely powerful card and given its low power consumption (for a dual GPU card) it would be a great investment for anyone that wants the best performance available to them.

Unless you strongly favour the green team I would suggest holding off on purchasing one right away. Wait for AMD’s response and their expected dual GPU card, the 7990 before deciding on which monster graphics card to buy.