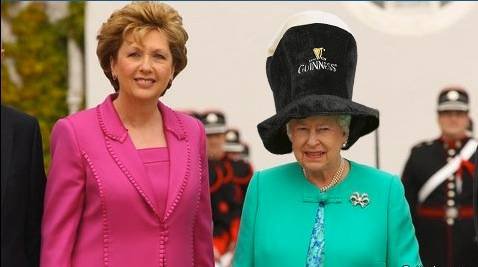 The Queen gets into the spirits of things. From @kelvinwins
4.65Kviews

Today was an historic day for Ireland. In what is seen as a sign of the peace and close friendship between The Republic of Ireland and the United Kingdom the country saw the first State visit by a British monarch.

Meanwhile, on Twitter the visit proved to be a goldmine for the best of Irish online comedy (and lightening fast Photoshop skills). Here are some of the best from today.

According to @fionnkidney there was a massive Garda presence on O’Connell Street today, we can’t argue with him.

Giant Garda presence on O’Connell St. in advance of #Queensvisithttp://twitpic.com/4yscuk

This isn’t quite the G&T the Queen is used to but at least it is in the spirit(s) of things. Photo by @kelvinwins.

Kudos to @johnbirrane for tweeting this #fail of the day.

@GinaMurphy saw through the Queen’s disguise straight away (P.S, Does anyone think this is better than what she actually wore?).

In some late breaking news @gregomeara discovered the Queen’s outfit for tomorrow.

Well, it was a long and busy day, you can’t blame the Gardaí. This unphotoshopped image by @lakesly.

Some of the Gardaí getting a little impatient on the day of #QueensVisit http://flic.kr/p/9JmcQN

@EntertainmentIE uncovered why it took the Queen so long to get to the Áras.

Among the highlights for #QueensVisit, the Viking Splash Tour http://i.imgur.com/10d4W.jpg

According to  @swearimnotpaul the Queen brought some friends along with her.

I think it looks like the Queen is wearing “jungle green” myself… http://en.wikipedia.org/wiki/Category:Shades_of_green #queensvisit