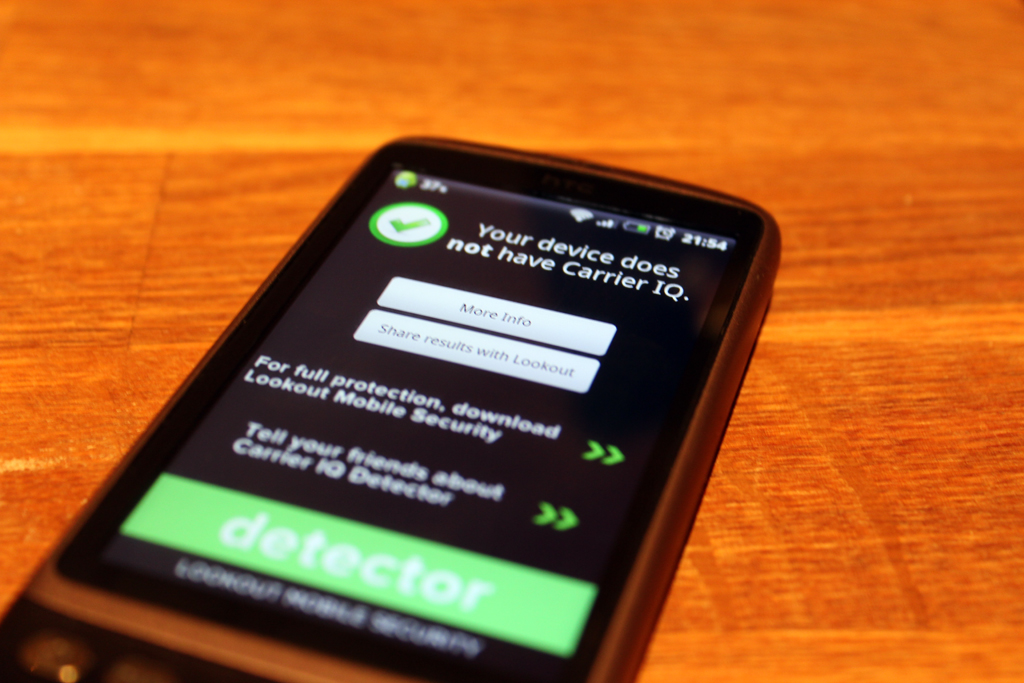 Mobile security firm, Lookout, has released a free standalone app designed to detect if Carrier IQ has been installed on your smartphone.  Lookout’s eponymous app is one of the leading data privacy and anti-virus apps available for Android and iOS devices, and as we said before we are big fans of their work.

Lookout also has taken the unusual step of using their blog to reassure users that Carrier IQ is not a root-kit as claimed by Trevor Eckhart in his detailed blog post last month.

In the blog post Lookout’s Tim Whyatt said, “There are also credible reports that a deeper look at the mechanics of Carrier IQ’s software indicate a bit of hyperbole in labelling it a root kit. In short, it doesn’t appear that they are sending your keystrokes straight to the carrier.

[…] so far, it doesn’t appear that Carrier IQ’s software is malware, and for that reason it’s not flagged as such by Lookout.”

The following day Lookout released its Carrier IQ Detector, an Android only application which, as the name suggests, detects if Carrier IQ’s system is present on your device.  But this is no removal tool; Lookout says they have released the app to allow users to gain more information about the management of personal data on their smartphone.  As the company does not label Carrier IQ as malicious software, and because it is so tightly integrated into smartphone’s firmware Lookout says that its removal would open the device to attack from malware and prevent it from applying OS updates.

Their analysis has been echoed by Dan Rosenberg, an eminent security consultant, who blogged last night saying that “CarrierIQ cannot record SMS text bodies, web page contents, or email content even if carriers and handset manufacturers wished to abuse it to do so” but it can record keys pressed when dialling a number.

Meanwhile European data protection bodies have launched investigations into the use of Carrier IQ by service providers.   In Germany the Bavarian State Office for Data Protection has officially requested that Apple explain its use of Carrier IQ software in its iPhone devices.  However, since Eckhart’s ‘exposé’ last month Apple has said that the software has not been included in the latest version of iOS.

In other Carrier IQ news the company has taken the drastic step of removing most of its contact information from its website.  Between November 30 and December 2 the company edited its site’s Contact Us page to remove detailed directions to its Mountain View Headquarters, while also removing some lines in its US, UK, and Malaysian addresses.

If you own an Android device and have used the Lookout app, tell us in the comments if it contains Carrier IQ (let us know what country you are in, what smartphone you have, and which carrier you are on).