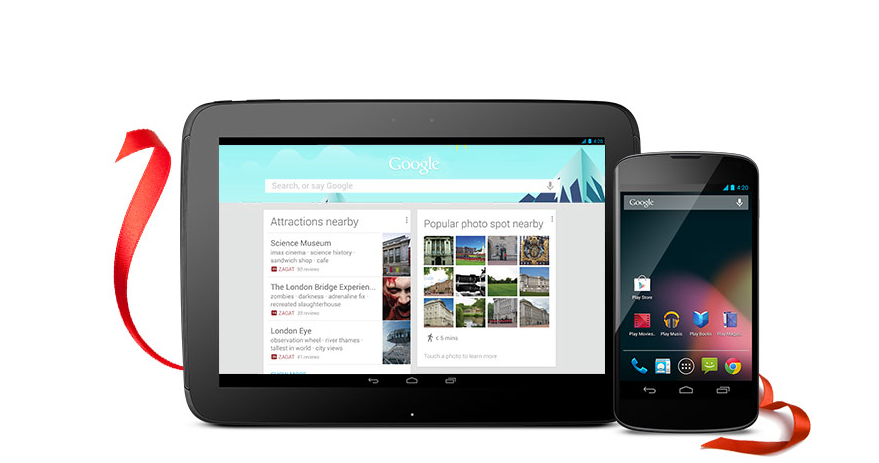 ’tis the Christmas Season, so that means that you’ve probably got your mitts on some shiny new smartphone or tablet this morning.

So then you’re probably wondering what apps (apart from the usual social networking ones ) you should download.  If that’s the case, you can have a look at our recommendations for the best iOS and Android smartphone and tablet apps over here –  including the best media apps and the best security apps you’ll need.

If none of those apps meet your needs then have a look at Google’s list of its own apps which it recommends that you should download to your new device.  Listing the best Google-made apps according to Android/iOS smartphones and Androd/iOS tablets Google’s list comes highly recommended by us, especially if you have just gotten an iPhone or iPad.

Google’s Nexus 7 tablet has done away with a rear-facing camera entirely, opting instead for only a front-facing camera for video chat

Speaking of security, if you have just gotten a new smartphone for Christmas then here’s what you need to do to ensure that, should the worst happen and it is stolen or lost, that you can recover it.  There are a few small things that you can do to your new smartphone right now that can ensure that if it is taken from you, you will be able to help the Police recover it as quickly as possible.

But just because you got a nice new tablet or smartphone today that doesn’t mean that your old one is useless.  Your old device can be used your any number of things, including as a basic wireless CCTV camera or as a dedicated second screen for your TV.

If none of those appeal to you, you can always give your old device to charity.  This is also true for old laptops and computers, which can be used as media streaming devices or can be given to charities such as Camara.  The US, UK, and Ireland based Camara charity takes old PCs and refurbishes them so they can be used to teach IT skills to children in Africa.