HomeScienceHow much does a Tyrannosaurus cost? About $1m, apparently
Science

How much does a Tyrannosaurus cost? About $1m, apparently 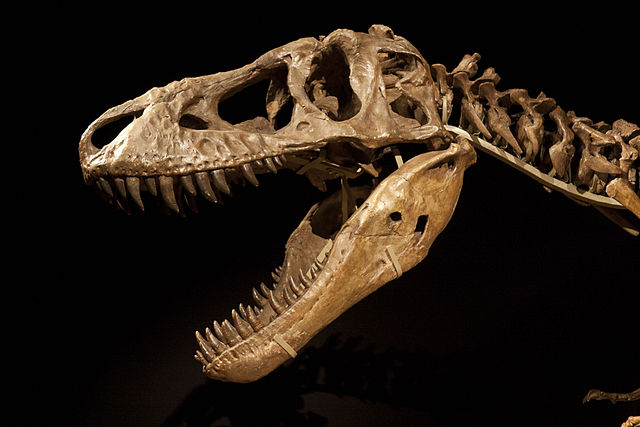 Like most young boys the only pet that I actually wanted (apart from some form of martial art skilled mutant turtle) was a dinosaur, but if I knew that all I needed to get one was $1 million then I probably would have started saving much sooner.

One buyer in the States dropped $1.05 million in a New York auction on Sunday to buy a nearly complete Tyrannosaurus skeleton.  The lucky buyer will take home, presumably not by themselves, the monted fossilised remains of a Tyrannosaurus Bataar (also known as a Tarbosaurus), a smaller Asian cousin to the North American Rex verity Tyrannosaurus.  According to the auctioneers this is the first time that “a fully prepared Tyrannosaur has been made available at public auction.”

According to the dinosaur’s auction page (yes, it has its own page), this is “very rare items that may not be auctioned again for some time.”

It goes on to say;

This is an incredible, complete skeleton, painstakingly excavated and prepared, and mounted in a dramatic, forward-leaning running pose. The quality of preservation is superb, with wonderful bone texture and delightfully mottled grayish bone color. In striking contrast are those deadly teeth, long and frightfully robust, in a warm woody brown color, the fearsome, bristling mouth and monstrous jaws leaving one in no doubt as to how the creature came to rule its food chain. Equally deadly and impressive are the large curving claws, with pronounced blood grooves. The body is 75% complete and the skull 80%, and it is mounted on a discreet gray-painted armature. Measuring 24 feet in length and standing 8 feet high, it is a stupendous, museum-quality specimen of one of the most emblematic dinosaurs ever to have stalked this Earth. Bone map and restoration details available upon request. Estimate: $950,000 – $1,500,000.

The Tyrannosaurus Bataar stands at 2.5 meters (8 feet) tall and 7 meters (24 feet) long and it about 75% complete, which is said to be significantly more than are typically found.  The buyer of the fossil remains a mystery, as the bid was placed by telephone, but we do know that he or she will have to wait before they can claim their prize.

The trouble is the Mongolian Government claims the fossil is legally its property and has started court proceedings in the States to have remains sent to Ulan Bator.  The provenance of the dinosaur is not fully known, although the auction house says the seller is “reputable”, but Tyrannosaurus Bataar fossils are typically found in Southern Mongolia’s and Northern China’s Gobi Desert.

Lawyers in Texas obtained a restraining order preventing the auction of the remains but since this was not enforceable in New York the sale went ahead.  Although, the auction house behind the sale has said it will not complete the transaction until the legal proceedings are sorted. So, we’ll have to wait and see.

Of course, if the sale doesn’t go ahead the buyer could still get his hands on a Mammoth in a few years.