What happens when you accidentally tweet something that you really should have emailed? You delete it right away; the only thing is Twitter is pretty slow at deleting tweets.

Huhne deleted his tweet but not before people took screenshots of it.

On Friday the UK’s Secretary of Energy and Climate Change, Chris Huhne, caused a stir online when he accidentally tweeted this mysterious message, “From someone else fine but I do not want my fingerprints on the story. C”.

The tweet was posted on October 7 at 18:10 and deleted about an hour later.  Unfortunately for Huhne, while the tweet might be gone from his public stream it is still visible on his Twitter account’s RSS feed.  In fact it’s the only tweet there. 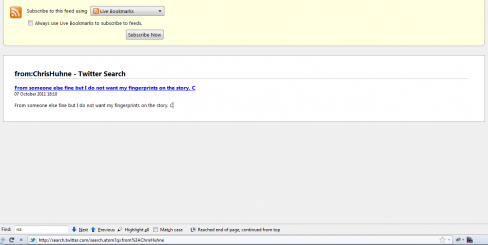 Chris Huhne's tweet RSS feed, "From someone else fine but I do not want my fingerprints on the story. C"

The reason for the delay is that Twitter manages public feeds and RSS feeds differently, so while the message is not visible on @ChrisHuhne’s public account it has remained in his account’s RSS, and may do for a few days.

By practice Twitter keeps all tweets online (here is the first message tweeted by this site in September 2010) but removes older messages from the searchable index after a few days (a search for our first tweet shows it no longer shows up in Twitter’s search results).

It is, however, possible to permanently save tweets using Google Reader – something Chris Huhne may not like.

Huhne’s Department initially said that his account had been hacked; speaking to the Irish news site The Journal the Department said, “We’re pretty sure it’s a hack. It’s definitely not Chris Huhne. We believe his account must have been hacked.”

Huhne isn’t the first politician to fall victim to Twitter’s slow deletion process; In August, Irish politician Joe Costello T.D got into trouble when he tweeted and deleted a nonsensical message (“@willmcgrath81 z. M zzz zz. Z”) to a student in reply to a question about university fees.

What Huhne was tweeting about remains a mystery, some papers believe it may have something to do with his marriage or political infighting, although somewhat poetically the errant tweet came the day after Huhne’s department held a Twitter Q&A.