As Facebook unveils its new policy on deepfakes, will the social media giant be able to handle a joke and know which videos are meant to be in jest as opposed to ones with nefarious intent?

Facebook’s counterterrorism chief is appearing before Congress today to talk about digital deception just two days after announcing Facebook’s new policy on deepfakes, but will Facebook be able to distinguish between what’s parody and what’s coordinated deception?

Today the US House Subcommittee on Consumer Protection and Commerce held a hearing called “Americans at Risk: Manipulation and Deception in the Digital Age.”

A major topic of discussion of Wednesday’s hearing centered around how to combat the spread of deepfakes and manipulated media on the internet.

In her testimony, Facebook’s counterterrorism chief Monika Bickert explained, “Manipulated media can be made with simple technology like Photoshop, or with sophisticated tools that use artificial intelligence or ‘deep learning’ techniques to create videos that distort reality—usually called ‘deepfakes.’

“While these videos are still relatively rare on the internet, they present a significant challenge for our industry and society as their use increases, and we have been engaging broadly with internal and external stakeholders to better understand and address this issue.

“That is why we just announced a new policy that we will remove certain types of misleading manipulated media from our platform.” 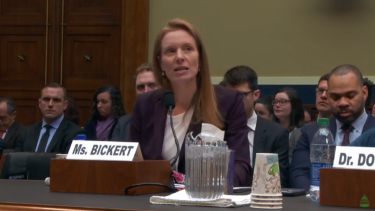 Facebook will remove misleading manipulated media if it meets the following criteria:

“We will remove videos that have been edited or synthesized using artificial intelligence or deep learning techniques in ways that are not apparent to an average person and that would mislead an average person to believe that a subject of the video said words that they did not say,” Bickert testified.

At first glance the policy looks like Facebook is attempting to stop disinformation from spreading, but at a second glance, it looks like there is huge potential for censorship because it leaves a lot of room for interpretation.

However, “This policy does not extend to content that is parody or satire, or video that has been edited solely to omit or change the order of words,” Bickert wrote on the Facebook blog.

How will Facebook navigate the slippery slope of deepfakes that may or may not have political motives? Remember what happened during the controversial “Drunk Pelosi” cheap fake?

Shadowbanning is also an option. In fact, Facebook holds the patent on shadowbanning tactics.

This article was written while the hearing was still in progress.