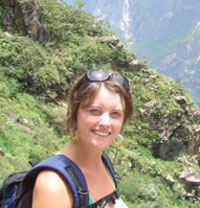 In what will stand to be a major test of the social good of new media technologies Irish journalist Ciara Kenny will, this week, begin live-blogging her life in a remote African village.

The project, called A Village in Africa, is being organised by the Dublin based international charity Self Help Africa who will be supporting Kenny during her month long trip to Zambia.

It will see Kenny living in Makwatata, a small village in the eastern region of of the country for a month.

Kenny’s blog will be hosted on the Irish Times website and will supported by a pioneering use of social media which will allow her to interact with her readers in real-time during the duration of the project.

With this in mind the overall aim of the blog is to give Irish and international readers an understanding of how government aid is affecting the lives of Zambia’s impoverished population . According to Kenny, “The focus will be on the everyday lives of ordinary people – what are their hopes, aspirations; what are the challenges they face, and also what are the steps being taken to achieve a better life for the generations to come.”

Zambia, as one of the poorest countries in Africa, is priority for Irish Aid; in 2009 the Irish government contributed over €25 million to projects in the country.

Readers will be able follow Kenny’s updates on Twitter, Facebook and YouTube. Self Help Africa hopes that this method of reporting will give readers across the world a greater insight into life in one of the world’s poorest countries.