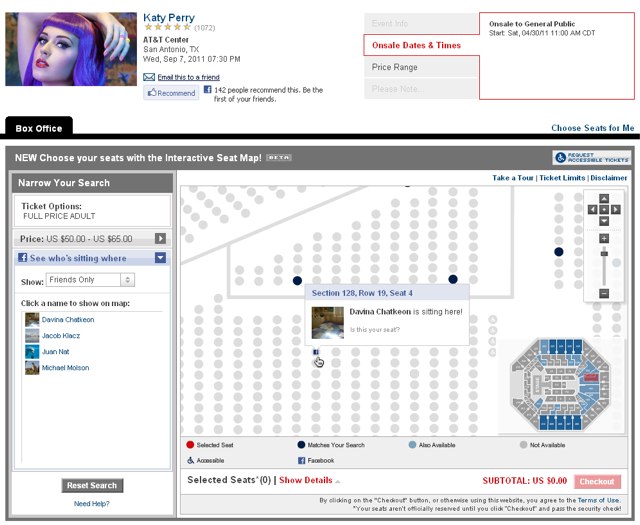 Ticketmaster has just introduced a great example of how Facebook’s social graph can be used in the real world. Event attendees can now share their venue seat location with Facebook friends, or with the wider Facebook community if so desired, on interactive venue maps.

If ticket buyers choose to connect their Facebook account with Ticketmaster, they’ll see an interactive map highlighting where their friends are already seated, enabling them to purchase tickets nearby. The idea is simple but according to executive vice president of ecommerce Kip Levin, will ultimately lead to increased ticket sales,

“We’ve learned a lot talking directly to consumers about how it’s impacted their purchase experience. One thing jumped out early on: people were buying tickets they would not have otherwise purchased because they could select seats near where friends or family were already sitting.” 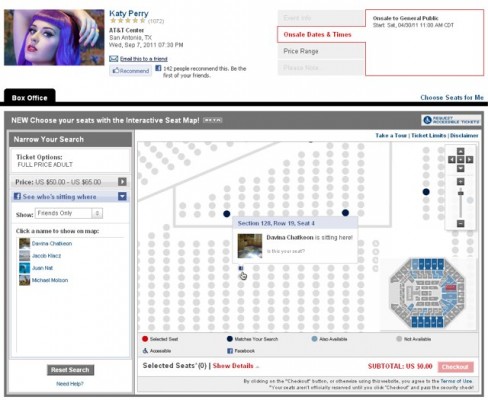 Ticketmaster’s interactive seat map is now live for more than 9,000 events. When choosing event seats, a list now appears on the left-hand-side showing Facebook friends that are already attending the same event and have chosen to share this information. Small Facebook flags over seat locations denote friends’ purchased seats.

With 75% of Ticketmaster users already on Facebook, seat-tagging has real potential to drive up ticket sales and improve the concert going experience for all.